I study ferns and lycophytes, mostly in the American tropics, and especially in Central America and the Andes. I am interested in what the species of ferns and lycophytes are and where they occur—something often poorly known for tropical species—and the evolutionary relationships among the species. I collaborate with other pteridologists (students of ferns) to generate phylogenetic trees based on DNA sequences that show how the species are related. I use the trees as a framework for answering questions about character evolution, biogeography, and the evolutionary process itself.

Besides research, I teach. I co-organize a five-week-long graduate-level course, Tropical Plant Systematics, in Costa Rica for the Organization of Tropical Studies. The course is taught in even years in English, and odd years in Spanish. I teach another course in Costa Rica, only three weeks long, called Tropical Ferns and Lycophytes.

Currently, I have a three-year grant from the United States National Science Foundation (with Kimberly Watson) to digitize and image the approximately 250,000 specimens of ferns and lycophytes in the Garden’s herbarium.

I also interpret ferns to the public. I am the President of the New York Chapter Fern Society, which meets the first Saturday of every month at the Garden. Finally, I serve as Associate Editor for Brittonia, the Garden’s journal of systematic botany, and for the American Fern Journal.

Finally, I serve as Associate Editor for both Brittonia, the Garden’s journal of systematic botany, and the American Fern Journal. 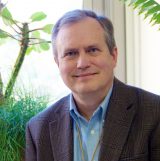