The William and Lynda Steere Herbarium of the New York Botanical Garden is a National Systematics Research Resource Center containing contains approximately 7.8 million specimens, making it the second-largest herbarium in the world, according to Index Herbariorum. It is named for William and Lynda Steere who have graciously endowed the herbarium; William Steere’s father, William Steere Sr., was President of The New York Botanical Garden from 1958 to 1972.

Within its extensive holdings, approximately 5.6 million specimens in the Steere Herbarium are vascular plants, 1 million are bryophytes (mosses and hepatics), 900,000 are fungi (including lichens) and 200,000 are algae.

Rich in both historical and recent collections, the geographical emphasis has traditionally been on the plants and mycota of the New World. We estimate that 3.2 million specimens are from North America, 3.4 million are from tropical America, and the remaining 1.2 million are from Africa, Asia, Europe, and the Pacific region.

Throughout its 125 years of existence, the NYBG Herbarium has grown steadily through collections made by staff members and collaborators, exchange, and incorporation of orphaned herbaria. Since the inception of the institution, NYBG staff and associates have conducted over 1,200 collecting expeditions, and the specimens collected on these expeditions comprise approximately 30% of the herbarium’s total holdings. Field expeditions by NYBG scientists have led directly to the discovery of approximately 5% of all land plants, demonstrating the profound influence Steere Herbarium specimens have had on our understanding of plant biodiversity!

The Steere Herbarium is the most active in the world in terms of new accessions and use by the scientific community. During the past five years, the Steere Herbarium has grown by 64,000 specimens per year on average. New specimens come from staff collections, exchange and gifts. We send on average 15,000 specimens on loan to 28 states in the U.S. and 26 countries, and we receive 217 scientific visitors per year who spend on average 14 days each using the collection.

The Steere Herbarium has long been a leader in digitizing specimen data and sharing it online through the C. V. Starr Virtual Herbarium. The specimen catalog currently contains digitized data from approximately 3 million specimens, with an average of 400,000 newly digitized specimens added each year. In addition to digitized specimens, the Virtual Herbarium contains Index Herbariorum, Electronic Floras and Monographs, the Garden’s contributions to World Flora Online, Index to American Botanical Literature, the DNA Bank and Structural Botany Collections.

In 2002, Mr. William C. Steere Jr., and his wife Lynda helped endow NYBG’s William and Lynda Steere Herbarium, the foundation of the Garden’s Research and Conservation Division. Mr. Steere’s association with the Garden goes back to childhood. His father, Dr. William Steere, Sr., a noted botanist, served as the Garden’s Director and President from 1958 to 1972. 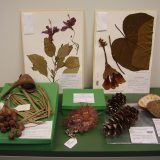