The basin of the Tapajos River in the Brazilian Amazon Rain Forest is a region of exceptionally high biodiversity and pressing ecosystem threats, including accelerating climate change and some of the highest deforestation rates in the Amazon. The plant communities of the region are very poorly known, and many large areas within the basin have been little studied by botanists. This paucity of botanical information about the region impedes critical research on the past, present, and future of Amazonian plant diversity. It also limits the extent to which considerations about plant diversity inform local development, management, and conservation decisions. This project will compile inventories of the plants of two protected areas in the region that are critical for the study, conservation, and management of biodiversity. The primary goal is to produce an interactive web-based conspectus guide to the plants of the two areas. Project data will be shared with scientists, conservationists, and Brazilian governmental agencies so that the plant resources and natural ecosystems contained within the two areas might be more effectively studied, protected, and managed. The project builds on collaborations with Brazilian scientists and enhances NYBG’s long-standing leadership in Amazonian botany. 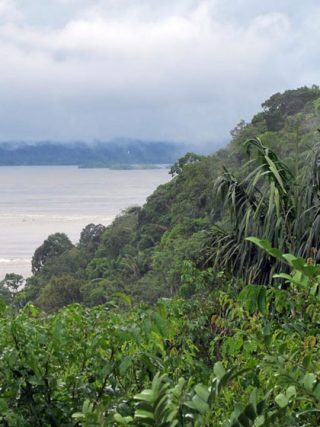 View overlooking the Tapajós River in Amazônia National Park. This botanically diverse area is slated to be impacted by hydroelectric development.