We began our field work in Vietnam in April 2007 when we made a collecting trip to Phong Nha Ke Bang National Park. Little did we suspect at that time how diverse and poorly known the palm flora of Vietnam would turn out to be. Since 2007 we have made 13 more collecting trips and each of these has turned up new species or new records for the country. We have made over 700 collections of palms from Vietnam, and we have described 40 new species in the genera Calamus (16 species), Licuala (12 species), Areca (1 species), Pinanga (6 species), Rhapis (1 species), Daemonorops (3 species), Korthalsia (1 species), and Plectocomiopsis (1 species). When we began our work in 2007 we thought there might be about 60 species of palm in Vietnam, based on the most recent flora (Gagnepain & Conrard, 1937). We have now recorded a total of 113 species for the country, almost double the earlier number. 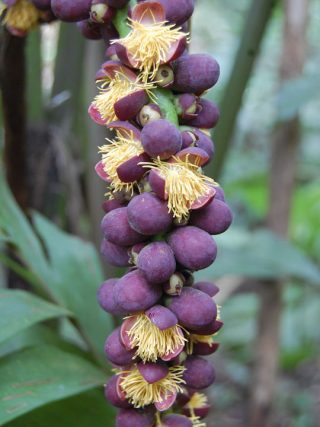 Flowers of Caryota monostachya from Vietnam.