Comprising approximately 150 species of trees and shrubs evenly divided between the Asian and American Tropics, the genus Ormosia is an outstanding example of the so-called Asian-American Tropical Disjunction Pattern. It is also an ideal system for exploring the historical assembly of these tropical floras and the biogeographical connections between them. In addition to its unusual distribution pattern, Ormosia is also notable for the variety of mechanisms that it uses to disperse its seeds. In the most famous example, brightly colored, but indigestible seeds are thought to mimic the similarly colored fleshy nutritive arils and seeds of neighboring species, thereby deceiving birds and other dispersers that ingest them. This project combines field, herbarium, and laboratory-based studies of Ormosia with phylogenetic analysis of molecular data to address fundamental biogeographical and evolutionary questions pertaining to the geographical distribution of Ormosia and the dispersal of its seeds. The project encompasses collaborations with scientists in Brazil and Taiwan. 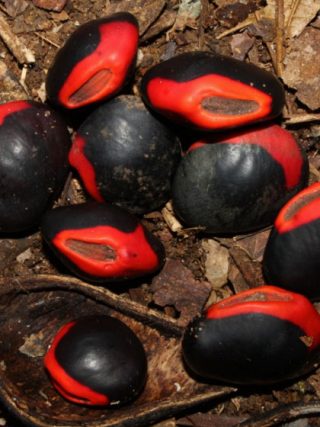