Posted in Bill Buck, From the Field, Science on February 20 2013, by William R. Buck 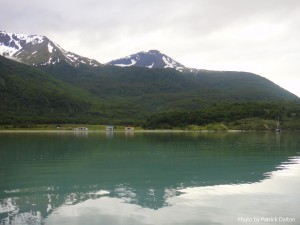 The night ends early and abruptly. Right after 1:30 a.m. we hit a very rough stretch of seas where we have to cross–perpendicular to the wind and waves–a large stretch of open, rough water just south of Cape Froward (the southernmost tip of continental South America). At first the ship is tossed into the air and banged back down into the sea, awakening everyone. Our little ship, a mere 60 × 20 feet, tosses about for hours on end. Anything not tied down or already on the floor is soon there.

Quite reasonably, the crew closes the door to the bunk room so waves won’t slosh down the ladder. However, this makes the room quite warm and increases the prospects of seasickness. And then, just like that, around 4:15 a.m. it all stops; I feel a cool breeze and the seas calm. Most of the group, exhausted from fighting to stay in our bunks and not get sick (some more successfully than others) fall swiftly back to sleep. Unfortunately it is to be a short reprieve.

At 6 a.m. I get up and venture outside to see the day. No surprises; it is cold, windy, overcast, and spitting rain. I go to the upper level and am surprised to see Blanka in the captain’s cabin; it was she who had opened the bunk room door right after 4 a.m. in an effort to escape the sour smell permeating the room. Taking advantage of the calm seas as we move down sheltered channels I return to bed. At 8 a.m. several of us chose to get up for the day–certainly a mistake!

Within moments, before I can even get dressed and leave the bunk room, we hit another rough stretch, this time as we round several small islands that expose us to wind and seas with no land between our ship and Antarctica. I make my way up the ladder to the deck, where I dodge waves crashing onto the ship’s deck just to get to the bathroom. Once there, rather than feeling sheltered I feel like a pinball bouncing off the walls. I finally make it to the galley as the seas get even rougher. Oddly, despite the high waves and strong winds, the sky is now clear blue and the sun blinding. It seems somehow incongruous; we seldom have sunny days here. In all my trips I have never experienced this kind of prolonged roughness. If my stomach wasn’t already empty, it would be so now–my first experience with seasickness is no fun. Fortunately, it is fleeting and by 9:30 a.m. we find ourselves once again in a sheltered passage. By 10 a.m. I realize I am more hungry than sick and cautiously eat a light breakfast of yogurt, oranges, and bread. 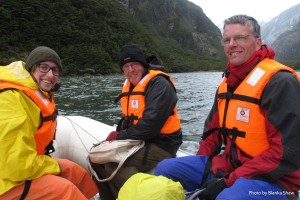 For the next few hours we continue toward our destination, or at least what I think is our destination. Not too surprisingly, after years of collecting down here, I have confused some of the collecting localities with others (fortunately computer databases don’t have such memory issues). At some point Blanka and I realize we are not heading toward the old-growth southern beech forest as I had intended but rather to a place that Blanka had previously dubbed ”the enchanted forest.” The place I had planned is now hours behind us so we will make do with where we are headed. We finally arrive at about 3 p.m.

Since this is our first collecting site of the trip it takes awhile for everyone to gather together their collecting equipment, to find their various layers of field clothes and to attire themselves. It is also the first time the Zodiac is put in the water and the outboard motor attached. Within half an hour everyone is champing at the bit to get started. The sound we are in is quite deep, often over 300 feet, so our ship is able to anchor not far from shore and in short order we are all ashore and fanning out through the dense forest with branches dripping with bryophytes and lichens. 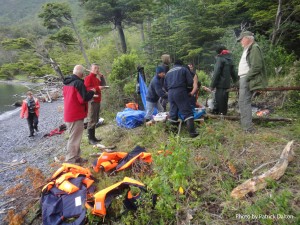 This site is well toward the western side of our flora region and therefore receives lots and lots of precipitation (I hesitate to use the word rain here because sleet is what we will mostly see this year). Our new, uninitiated group members are astounded at the continuous, deep liverwort/hornwort mat–courtesy of this intense precipitation–that carpets the forest floor. The enthusiasm of the inexperienced leads the majority of the group to say they do not want to return to the ship until 8 p.m. While there is plenty of light to get around until that time, inside the forest with an overcast sky, at 3:30 p.m. it is already too dark to see very well. So, while it is lightest I head into the forest. Within an hour I am forced to the edge of the forest along the coast where the light is better. And then, within another hour–amid greatly diminished returns–I decide to catch an early zodiac back to the ship. This allows me to get my collections processed and on the dryers before the crowd (and to get the dryer space I wanted!). Shortly after, the group reappears. I love seeing the expressions on the faces of my colleagues when first encountering this amazing landscape.

It is warmer this year than last with much less sleet, and more clear skies. We hope this pleasant pattern holds! But regardless of the temperature, we still need rain gear because the vegetation is so saturated, so we hope it won’t get too warm as that makes being encased in rubber quite uncomfortable. Time will tell.

Our next site is about 9 hours away. In speaking with the captain, I told him it is his decision when we depart and he has decided we will leave in the early morning. After a large dinner the hepatic group is able to set up their microscopes, cameras and computers, and image the oil bodies from their fresh collections. I understand they were finally evicted from the galley–which also serves as the bunk room for the cooks–at midnight. After the night before, when I got little sleep, I head to bed at 10 p.m. I am the first one in the bunks and am asleep before the others even arrive in the bunk room.