The dazzling floral creations of Jeff Leatham, famed artistic director of the Four Seasons Hotel George V, Paris and floral designer to the stars, energize the 18th annual Orchid Show. Leatham’s bold and colorful vision unfolds through captivating installations and designs, transforming each gallery of the exhibition in the historic Enid A. Haupt Conservatory into a different color experience and visual effect, like the turn of a kaleidoscope. 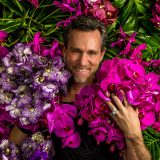 “Color is the first and most important aspect of my work, always. I want every gallery to be a different color experience, like looking into a kaleidoscope.”

Jeff Leatham is the famed artistic director of the Four Seasons Hotel George V, Paris with studios in the Four Seasons Hotel Philadelphia and the Four Seasons Hotel Los Angeles at Beverly Hills. He has been creating a sensation with his floral installations since he began his career in 1995. His work is a combination of his love for flowers and passion for design. Using shape, color, and simplicity, his creations are dramatic, bold, unforgettable statements that are always an integral part of the setting. His clients include Cher, Dolly Parton, Oprah Winfrey, the Kardashians, His Holiness the Dalai Lama, and many others. His publications—Flowers by Jeff Leatham, Flowers by Design, and Jeff Leatham: Visionary Floral Art and Design—remain best-selling design books worldwide. @jeffleatham

Step Into a World of Color and Style with Orchid Evenings

Lose yourself in twists and turns of color at New York City’s most spectacular evening outings. 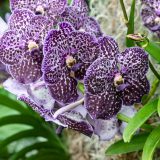 See what media has to say about this year’s Orchid Show: