NYBG is temporarily closed and Orchid Evenings will not take place. Learn more.

Step Into a World of Color and Style

Lose yourself in twists and turns of color at New York City’s most spectacular night out. Discover famed designer Jeff Leatham’s colorful and bold vision for The Orchid Show—a kaleidoscopic display of dazzling orchids, mirrored sculpture, dramatic lighting, and more. Experience the singular style and high energy of Princess Lockerooo and her collective of performers, who set the stage for cocktails and local flavors from the Bronx Night Market.

Advanced purchase recommended to guarantee admission; events do sell out. When purchasing a ticket, select an entry time to enter the Conservatory to view The Orchid Show. You may arrive anytime between 7–10 p.m. to enjoy the evening, although entry into the Conservatory is at the time indicated on your ticket. 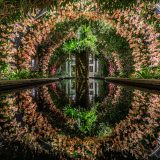 About The Orchid Show

Featuring the dazzling floral creations of Jeff Leatham, the famed artistic director of the Four Seasons Hotel George V, Paris and floral designer to the stars. Leatham’s bold vision unfolds through captivating installations and designs, transforming each gallery of the exhibition in the Haupt Conservatory into a different color experience, like the turn of a kaleidoscope. 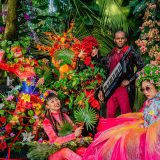 Get Ready to Vogue and Walk the Runway

Leading Vogue and Waacking-style dancer-choreographer Princess Lockerooo teams up with renowned musician Harold O’Neal and a collective of performers for a fierce and fabulous evening of dance, live music, and DJ sets. Come dressed in your boldest botanical-inspired attire, express yourself on the runway, and experience high floral fashion by House of Hallucination.

Princess Lockerooo (Not performing March 20 & 21)
A multifaceted performance artist, content curator, educator, and activist, Princess Lockerooo has appeared on So You Think You Can Dance, worked with top artists such as Madonna and Icona Pop, and produced entertainment for events across the world, including Lincoln Center and Summerstage.

Harold O’Neal (Not performing March 20 & 21)
This pianist, composer, actor, and dancer has performed with U2, appeared in Jay-Z’s Young Forever music video, and portrayed a piano-playing hepcat in HBO’s Boardwalk Empire. He has been featured on MTV, NPR’s All Things Considered, and more, drawing comparisons to Duke Ellington and Maurice Ravel by The New York Times. 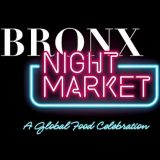 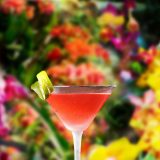 Purchase a signature cocktail, beer, wine, and more from one of our seasonal bars. On Saturday nights, enjoy a pre-show meal or light bite at the Hudson Garden Grill (last reservation at 5:30 p.m.). Make your reservations on opentable.com