UPDATE: Valid proof of COVID-19 vaccination for visitors over the age of 5 is required for entry to indoor exhibition spaces and facilities. Learn more.

A perennial hallmark of spring, daffodils are most commonly recognizable for their distinctive form and cheerful yellow color. In fact, daffodils can be found in a wide range of colors, from the palest white to deep golds with shades of orange, pink, and red. Native to Mediterranean and mountainous Europe as well as northern Africa, daffodils are now grown in cultivated landscapes throughout the world. The plants were used in antiquity for medicine and in ancient Egypt to fragrance perfumes. Daffodil bulbs lie dormant throughout winter, and with each year their spring blooms become more numerous and spectacular, covering the landscape with a sea of colorful, swaying flowers. After the bloom period ends, the foliage remains to photosynthesize and store energy in the bulb to ensure next year’s bloom.

Daffodils, or the genus Narcissus (learn more about Latin nomenclature), have been cultivated at The New York Botanical Garden since the early 1900s. With the addition of new plants—some through generous gifts from prominent daffodil growers, and some through the careful work of Garden horticulturists—Daffodil Hill has flourished for nearly a century. The Million Daffodil initiative, launched with the planting season in fall 2015, seeks to further expand this unique and varied collection for future generations.

We plant daffodil bulbs in fall on the Hill, when the bulbs are dormant and the ground still warm enough to dig, which allows the bulbs to establish roots before the ground freezes in the winter months.

In spring, Daffodil Hill is awash with color as the daffodils sync bloom time with nearby crabapples and cherries.

In summer, we let our lawn become a shaggy meadow. Abstaining from mowing in the next several months is crucial, as our daffodils are still photosynthesizing and storing nutrients in their bulbs. This is a happy time for the seed-eating birds.

Only once the grasses have thoroughly set seed, and well-after the daffodil foliage has died back, do we mow.

The cycle begins again in fall. 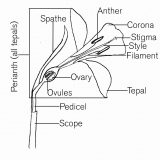 Get to Know Daffodils

Daffodils can be classified into 13 different divisions based on their anatomy, but they all share the same basic biology.

Scope, or stem – carries food, water and minerals throughout the plant, and supports the flower.

Pedicel – the stalk of a single flower on a stem with multiple blooms.

Spathe – the thin brownish-green form attached to the stem at the base of the flower. Forms a protective layer over the bud, and unwraps as the bloom opens.

Perianth and tepals – tepals, or petals, form above the ovary. All of the tepals of a daffodil are referred to collectively as the perianth.

Corona – the central structure of the flower, extending outward from the petals, is named for its crown-like shape.

Stigma – Part of the female reproductive system of the flower, the stigma is the pollen accepting organ.

Style – Part of the female reproductive system, the style connects the stigma to the ovary.

Ovary and ovules – the female part of the plant, which contains ovules. After an ovule is pollinated it becomes a seed.

Filament – the supporting structure of the anthers.