With approximately 19,500 species, the plant family Leguminosae (also called Fabaceae or the legume, pea, or bean family) is the third largest family of flowering plants. It has a global distribution and is of great ecological importance in terrestrial habitats throughout the world, with species diversity peaking in the drylands and rainforests of the Neotropics and Africa. Leguminosae is also one of the most economically important plant families, second only to grasses, with many species playing fundamental roles in human and animal nutrition, energy, medicine, soil improvement and stabilization, landscape reclamation, construction, industry, and horticulture.

Throughout much of its history, The New York Botanical Garden (NYBG, founded in 1891) has maintained an active research program on the systematics and biology of Leguminosae. The focus of legume research at NYBG has been and continues to be on documenting and classifying legume diversity in the New World in conjunction with long-standing floristic and botanical inventory programs in the United States and Latin America and through collections-based research in the Steere Herbarium (NY), which contains one of the foremost collections of New World legumes. This emphasis began with the Garden’s first director, Nathaniel Lord Britton, who with his associates, wrote seminal monographic and floristic treatments of various groups of New World legumes. The post-brittonian era witnessed a succession of legume researchers at NYBG, including such major luminaries of 20th century plant taxonomy as Richard S. Cowan, Howard S. Irwin, and Rupert C. Barneby. The published legacy of legume research by NYBG scientists, students, and associates consists of many thousands of printed pages, including many important taxonomic, monographic, and florisitic works.

Today, legume research at NYBG continues under the coordination of Dr. Benjamin M. Torke , Assistant Curator in the Institute of Systematic Botany. Current research is focused on the systematics and evolution of the swartzioid and aldinoid legumes and related groups of subfamily Papilionoideae. Together these taxa constitute the living descendents of several fundamental branches of the papilionoid phylogeny. Phylogenetic work aims to recover relationships within the swartzioid and aldinoid clades and to resolve the base of the papilionoid phylogeny, thereby strengthening the evolutionary framework for understanding the origins of the papilionoid flower and seed. The species-rich neotropical genus Swartzia is the subject of ongoing collaborative revisionary and monographic work, with the long-term goal of developing a model in tropical trees for exploring evolutionary diversification in rainforests. Another focus is to make specimen and taxonomic data increasingly accessible and updatable by producing dynamic online specimen catalogues and electronic monographs. Current initiatives along these lines are focused on Swartzia, the taxa monographed by Rupert Barneby, and the legumes of Brazil.

Legume resources and research projects at NYBG:
The Barneby Digital Monograph and Specimen Catalog
Phylogenetics and taxonomy of Ormosia
A systematic monograph of Swartzia 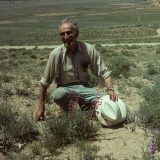 The Rupert Barneby Award, named in honor of the late NYBG scientist and renowned legume expert, consists of US$2000 granted annually to assist researchers to visit The New York Botanical Garden to study the rich herbarium collection of Leguminosae.

Graduate students and early career professionals with research in systematics and/or legume diversity are given special consideration. Projects that will result in the improved curation of the collection are desirable. Anyone interested in applying for the award should submit the following: 1) curriculum vitae; 2) a proposal describing the project for which the award is sought; 3) contact information for two individuals who can vouch for the qualifications of the applicant. The proposal should address specifically the activities to be performed at NYBG and should consist of four parts: 1) title page with proposal title, applicant’s name, address, and e-mail address; 2) body of the proposal of no more than two pages, including justification, objectives, and research plan; 3) literature cited; 4) travel budget. The application should be addressed to Dr. Benjamin M. Torke, Institute of Systematic Botany, The New York Botanical Garden, 2900 Southern Blvd., Bronx, NY 10458-5126, USA, and received no later than December 1 of the current year for consideration for the following year’s Award. Submission by e-mail is preferred btorke@nybg.org.

Announcement of the recipient will be made by January 1. Travel to NYBG should be planned for some period during the 12 months following the announcement. Recipients are asked to give a presentation about their research.