Posted in Bill Buck, From the Field, Science on February 25 2013, by William R. Buck 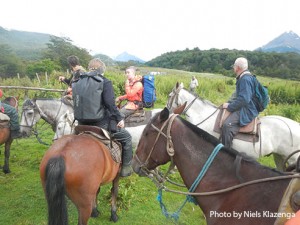 We arrange for the horses to be ready at 9 a.m. Initially the crew tell us it will cost about $30 to rent a horse for a day, but the ranchers counter with $50. This is more than I am prepared to spend, but with some negotiation we settle on $40 for each of the seven horses plus a guide for the day. I decide $280 is well worth the opportunity to access an area in our flora region that otherwise would be unreachable. 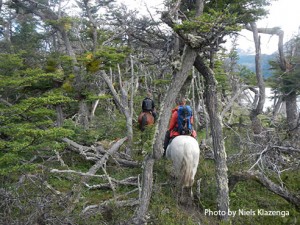 As we ready for the day in the field, the crew fix our pack lunches and ready the Zodiac to take us ashore. When we arrive, the horses are saddled and ready to go. Our group consists of two extremes in horse experience; at one end I have never been on a horse before, and at the other, Ernesto, Juan, Blanka, Niels, and Laura all have some experience. My only similar experience is the time I  rented mules years ago to ascend Pico Duarte in the Dominican Republic, the highest peak in the West Indies. Then, as I suspect now, the stirrups are made for someone much shorter than I leaving two options, letting my legs dangle or putting my feet in the stirrups with knees strongly bent. On a horse dangling legs are really not an option, and sure enough, it is my knees being kept bent so long that proves my primary discomfort. 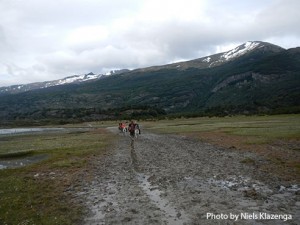 We are told it will be a 3-hour ride out and 2 1/2 hours back. Since the journey is mostly over level ground, the discrepancy in time won’t become clear until the return journey. We are each paired with a horse and helped into the saddle. I was the last to mount, and once in the saddle we started out. Shortly into the trip to the Serka Glacier, I promise my horse that if he just gets me there in one piece, I will give him my apple. The first time he starts to trot rather than just walk, I hold on for dear life to my saddle. But once I realize dealing with the trot is mainly an issue of balance in order to not fall off the horse, I am more comfortable. I know perfectly well that I am not going to pick up any riding skills in my short time on a horse. 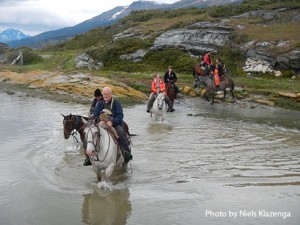 The river draining the glacier is very wide and braided and so we have numerous stream crossings, varying in depth from a couple of inches to well above the horse’s belly. For the least experienced rider in the group, I have no idea why I am given the most independent horse. Every other horse just follows the lead horse, but my horse always seems to want to go on his own trail. He also doesn’t like fording streams and insists on finding his own crossing points, different from those of all the other horses. Additionally, he doesn’t like other horses to pass him and so whenever a horse tries to pass he breaks into a trot in order to stay ahead. 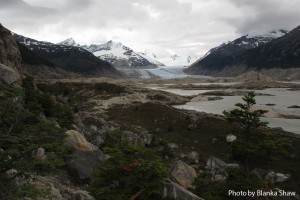 Independent horses aside, we all make it to the Serka Glacier without anyone falling off. Lunch is the first thing on the agenda, and as promised, I try to give my apple to my horse. However, he shows no interest and I suspect he just doesn’t recognize it as food.

After lunch we have four hours of collecting time before we need to begin our return, so we set off on foot for the glacier. The horses are tied in a nice southern beech forest, but only a short distance away the landscape changes to look more like tundra. 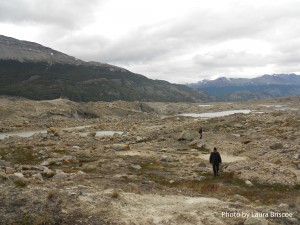 Only a single species of low-growing shrub, Empetrum rubrum, dominates the vegetation. Granitic boulders ranging from quite small to larger than a house are everywhere. And just as I had hoped, the bedrock, or at least the water that seeps from it, is calcareous. In some ways I find this site disappointing because it is drier than previous glacial sites, meaning it has lower bryodiversity. However, what we do find is quite nice. 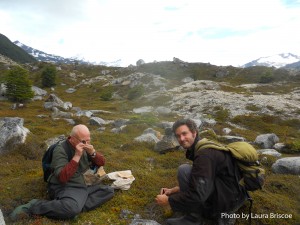 Almost right away Juan finds a moss, Racomitrium ptychophyllum, new to the flora region. As hoped, Pottiaceae dominates the moss vegetation and I’m quite sure we have found several species new to the region. After getting close to the face of the Serka Glacier (54°47’S, 68°59’W) and with an hour left, I decide to collect in the forest where the horses are tied. I find that species more typical of Navarino than the wetter regions dominate the forest. I also find more lime-loving mosses on the shaded cliff face. In all, I make 90 collections and dread the prospect of having those on my back all the way back to the ship. So, keeping my collecting pack, I cram as many of my collections as would fit into my backpack and ask one of our crew who accompanied us if he would carry it back for me. 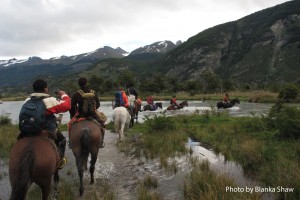 We soon discover why the return trip is shorter: The horses know they are heading home. This induces them to much more frequently break into a trot. The only advantage I find in this is that it means my time atop my horse will be shorter. As I bounce up and down on my horse, I am so glad that pack was not on my back! By the time we return to Yendegaia at almost 8 p.m., not one of us is not moaning from some discomfort as we dismount. I’m not sure my knees will ever be the same and all of us have sore butts from bouncing across the rugged landscape. 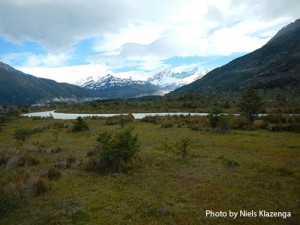 Dinner turns out to be roasted lamb, exchanged for fish from the ranch. However, my goal is my bunk. After eating only half my dinner, I am the first to retire. I don’t even touch my collections from the day because I am so tired. I know we will move a couple of times in the night. We need to pass a maritime control point in the Murray Canal between Hoste and Navarino islands that is closed at night and opens at 6 a.m. So, we get to just north of there for the night and in the morning move to Seno Ibáñez, our next site. Despite the physical discomforts of the day, I don’t think anyone regrets the option we chose. At the same time, I think we are all also glad that this is not an all-horseback expedition!

As a youth I enjoyed reading books like ‘Into Africa: The Epic Adventures of Stanley and Livingstone’. It’s great to know there are still “undiscovered” places to be explored. Thanks for writing about your expeditions; this entry is particularly exciting (and amusing!).