Posted in Bill Buck, From the Field, Science on February 22 2013, by William R. Buck 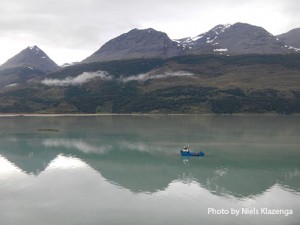 The ship moves overnight. We arrive here at 4:30 a.m., just 15 minutes after I come up on the deck. However, except for the captain’s area, all is quiet with the crew and so I return to my bunk until there is more activity and the sun is up. Returning to deck at 7:30 a.m.–still the first non-crew–I find that we are in a quiet bay and that there is a light rain falling. The bay is fed by a shallow but broad river originating at a glacier. As a consequence, the water in the bay is milky and opaque from the large silt load. I don’t remember ever having seen this down here before and I wonder if it will be an indication of a different local substrate (and thus a different bryoflora). 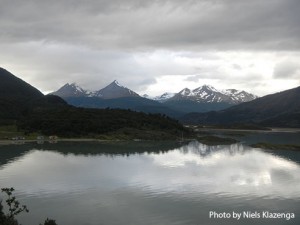 After several seasons of collecting in pristine areas, the existence of a ranch just over the hill from where we are anchored and evidence of human influence on the landscape seems quite odd. When we split up half the group goes to see the ranch and look for bryophytes on disturbed substrates. I, along with Paddy and Niels, choose to cross the bay which proves quite the challenge. The cloudiness of the water combines with what I can only interpret as low tide making the bottom invisible. As the Zodiac approaches the shore, the water begins to churn with the activity of what seems to be a large number of large fish (we couldn’t be sure because the water is so cloudy we can’t actually see what is causing the commotion). 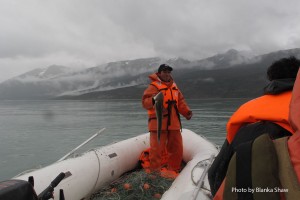 Our Zodiac runs aground at least 50 yards from shore and we are surprised to find the water shallow enough to wade to shore through a muddy, seaweedy slush. Our boots sink into the slimy mess up to our ankles making each step a chore. While we struggle to shore, the existence of fish is confirmed; after dropping us off the crew get a net and go fishing. By the time I return to the Zodiac the crew have caught well over 20 fish, each about a foot long, each the same and going by the local of name of robalo. There will be fresh fish for dinner tonight, and for days to come. The freezer is now well stocked! 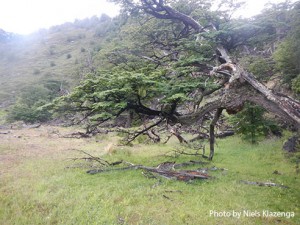 In a matter of moments upon reaching the rocky prominence we were heading for I realize we have stumbled upon an unusual habitat. The area seems to be strongly calcareous, completely unlike any other rocks we have seen down here. There seem to be bands of marble throughout the rocks and the bryophytes certainly know it is a basic substrate. In general, the moss family Pottiaceae is poorly represented in this region, but here most of the mosses belong to this family and it makes me doubly grateful to have María Cano and Mayte Gallego of the Universidad de Murcia preparing the Pottiaceae for the flora. 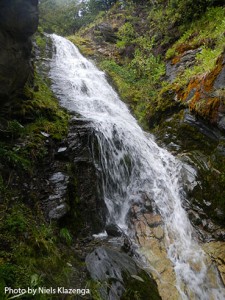 In short order Paddy and Niels lose patience with me and move further down the shore. I know I will be on this outcrop until our Zodiac returns and so I just wish them happy collecting and return to my own collecting frenzy. I find myself bagging one moss after another about as fast as I can.  I continue in this fashion for about three hours until I run out of paper bags. This seldom happens to me because I tend to carry more than I think I will need. I am certainly taken by surprise by the moss diversity at this small site.

Upon returning to the ship I learn that the group that went to the ranch inquired about the possibility of renting horses to get to the glacier that is the source of the river causing all the turbidity in this bay. They are told it is a 3-hour ride to the glacier and 2 1/2 hours back. Everyone agrees that it does not seem a real possibility. And yet, it is a temptation and we continue to discuss it. John makes it plain he has no intention of getting on a horse but the rest of us seem up for the adventure. I have never been on a horse, but after such good collecting in the morning, I don’t want to pass up the opportunity to see what could be a spectacular site. 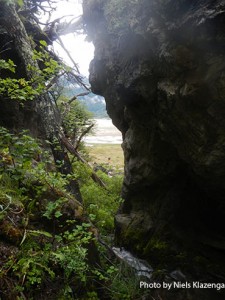 So, I talk to the captain. We have already adjusted the itinerary based on the captain’s suggestion that three days are not enough for visiting the south side of Isla Hoste. The captain maintains that the weather there is such that we could easily get trapped for more than three days. So the south side of Hoste has been moved to next year in favor of a visit to the Península Hardy on the same island. And since we are the ones dictating the itinerary it is decided that we will be flexible and spend the night here! The ship is in radio contact with the ranch, and after some negotiation over the price, we have arranged to rent horses the following morning and spend the day going up to the Serka glacier. Adventure looms!

In the afternoon, Paddy, Niels and, John return to the field. I have to process the massive collections I made this morning and see little point in adding more wet collections before getting these on the dryers. The hepatic group (Laura, Blanka, and Juan) also chose to stay aboard the ship to catch up on their oil body photography while we remain stationary.

Now, we (except John) are champing at the bit for tomorrow’s adventure. Horseback is a form of transportation I never imagined I would be using in the Cape Horn area. If the rocks near the glacier also prove to be calcareous, it should mean amazing collecting.