From the Field: Bill Buck in Cape Horn 2013, Day Seven

Posted in Bill Buck, From the Field, Science on February 27 2013, by William R. Buck 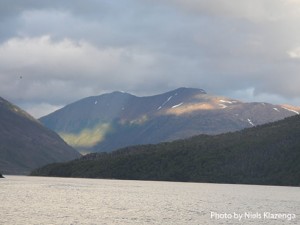 We don’t move to today’s locality until this morning. The ship starts up at 6 a.m. for the five hour trip to Bahía Helada. I am told the bay is so named because in winter it completely freezes over with the ice reaching 6 inches thick. Fortunately it’s now summer! Because it is so late when we arrive, I ask if we can have an early lunch before heading into the field. Unfortunately lunch can’t be ready until 1:30 p.m., so we all head into the field for a couple of hours first. Blanka and Laura decide to forgo lunch completely and try to reach some higher elevations.

Most of the group heads to a Sphagnum peatland while I choose a coastal southern beech forest with a large epiphyte component. The weather is surprisingly nice and mostly sunny, though a few spits of rain fall. The problem with nice weather is that it is hard to dress for because invariably it will get worse and no one wants to be out in the field with inadequate clothing.

On the edge of the forest I find mostly epiphytes, almost all of which are mosses. However, as soon as I enter the forest, it becomes strongly hepatics-dominated and so I switch gears and start primarily picking up hepatics, lichens, and fungi that grow on the two. Somehow in the scant two hours I find 50 things to collect.

Back on the ship for lunch, everyone is excited by the morning’s finds. The peatland group found not only the more common species of the habitat, but a number of rarer species as well, such as the local endemic Neomeesia paludella.

Lunch is a real treat. The omnivores have a bean and pasta stew with chorizo while Niels and I have beans and pasta. Although decidedly tasty, the delight is dessert. Somewhere from within the bowels of the ship, the crew produce a large watermelon. The cold, juicy fruit is very sweet and a welcome addition.

After lunch we again disperse in multiple directions, trying to sample the bryoflora as completely as possible. Once again I find myself in a wet southern beech forest. As I work my way through the forest, I keep finding bryophilous fungi, most of which are surely unknown to science. I am sure I am exceptionally attuned to these tiny fungi because I intend to take a class on them at Eagle Hill in Maine this coming summer. 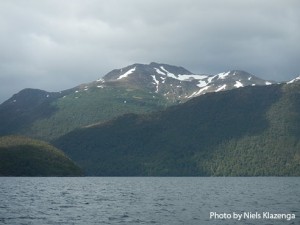 Because of their extremely small size, it takes some experience just to see bryophilious fungi, plus some luck. I briefly wonder if I should be taking the time to collect these organisms while on a grant to inventory the bryophytes of the area. However, I quickly decide that in many ways the National Science Foundation is getting more bang for their buck by me bringing back things for various colleagues around the world. Plus, I am actually drawing attention to this remote corner of the globe. It’s certainly not like I’m neglecting the mosses, since I usually collect more than anyone else, but I am also gathering these value-added organisms into my paper bags, many of which I suspect will be new to science. Perhaps one day NSF will sponsor a lichen project in the region and my collections will help to justify such a project. 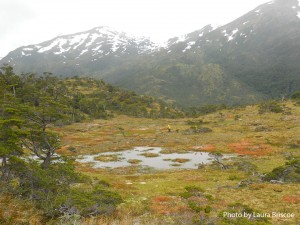 John and I return to the ship at 5:30 p.m. and right away I start processing my collections. Earlier I had quickly numbered the morning’s collections but had not had time to get them on the dryers. So, now I number the afternoon collections and descend into the hold. I have come to hate getting in and out of the “bodega,” as it feels a bit like taking your life into your own hands. There are only small metal steps, each about a foot wide and consisting solely of a single piece of bent rebar, with no hand-holds on the side. Even when you get on the top step, the remainder are recessed so you have to feel around with your foot to find the next step while dangling precariously about 10 feet above the floor of the bodega. I think the only reason no one has fallen yet is because it is so difficult and requires so much concentration. My shins, though, have multiple scabs from banging them against these raw metal steps. As a consequence, I try to keep my trips to one a day, removing the dry collections and putting the new wet collections on the dryer at the same time. Fortunately, the dryers seem to be working better than ever and most collections dry in a single day.

Like a mother hen, I am nervous when my charges are still out in the field. Although Niels and Paddy have a set pick-up time, Laura and Blanka have said that they will just come to shore and wave to get the attention of the crew on the ship. By the time of the Aussie pick-up, rain is steadily falling. I was aware of this because as I am working at the dryers, the bodega is covered with a blue tarp to keep the rain out. With the weather deteriorating, Laura and Blanka come down and catch the same zodiac as Niels and Paddy. Now we are just waiting for Juan and Ernesto. They are attempting to reach the ridge summit, where snow still holds. Laura says she saw them at the top. Hopefully not only do they have a safe descent, but have also found some interesting mosses.

Tomorrow we will move an hour and a half east though Seno Ponsonby so the ship will stay here for the night. Today marks the end of week one of our expedition, with two more weeks to go. Time is flying by! The family of sea lions cavorting near the ship is a nice way to mark the first week.