Posted in Bill Buck, From the Field, Science on February 26 2013, by William R. Buck 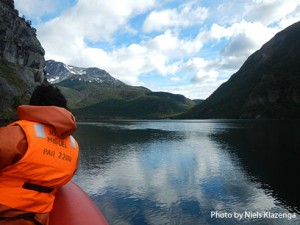 Not too surprisingly after yesterday’s physical exertion, we are all slow to get up this morning. Much to my delight, I am not nearly as stiff as I had expected I might be, but several others are. After a leisurely breakfast, I offer two options to the group, go into the field in the morning and the afternoon, or spend the morning processing the previous day’s collections–since no one did that last night. I am the only one to stay on the ship. I want to insure that the Serka Glacier collections are dry, or at least on the dryer, before gathering more. Being the only scientist to stay on the ship, I am able to process all 90 of yesterday’s collections; get them on the dryer; empty the dryer of earlier, now dry collections and move them to the engine room for storage; and catch up on the blog. 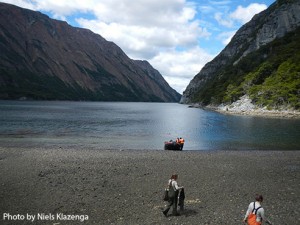 The weather is incredible. Yesterday it was sunny for most of the day–a sun-block day for sure–and it is mostly sunny today. I’m sure it is the nice weather that has lured the rest of the group into the field. While I am waiting for the group to return for lunch, I am able to take advantage of a hot shower. It’s amazing how luxurious such a simple pleasure can be under the right circumstances.

In the afternoon I go into the field. I spend several hours slowly working my way along the base of a cliff, and then into a forest which has previously been disturbed by a landslide. There must be something about southern beech wood, coupled with the climate, that results in decorticated logs lasting many years with no apparent rot. This proves to be one of few opportunities to collect specimens from decaying logs. I am able to collect a number of bryophytes and lichens which I have not seen previously, or only rarely. 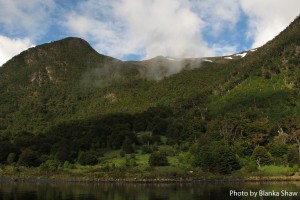 With the austral summer, it stays light here at this time of year until around 11 p.m. So even though it is now 7 p.m., it seems like full daylight and most of our group probably will not come in from the field for another hour. With the glorious weather of the last two days we haven’t needed to wear as many field clothes. Today it is substantially warmer than usual and the only rain was a brief shower in the morning. It has been nice not being encumbered by the typical bulky rain gear, however I don’t anticipate this weather to hold. 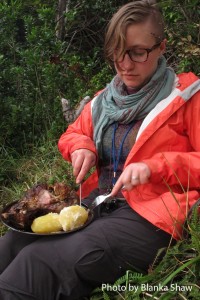 Sometime last night the ship stopped and purchased a whole, cleaned lamb. The carcass was hanging on the deck when we got up this morning. After lunch it was dismembered with a hacksaw in preparation for cooking. The crew decided a barbeque was the best way to prepare it, and so built a fire on shore and began roasting the lamb. We are having more of these exotic experiences on this expedition than on previous ones. Although Niels and I did not partake in the lamb, the barbecue was one more chance to enhance the field experience for the others. It was a big hit and even the Chileans were making jokes about the Flintstones because of the huge portions of meat they were serving. The night was made even more special when a sea otter came quite close to the beach where we were enjoying the evening.

In the night we move to Bahía Helada (Frozen Bay!) for our next collecting sites. We will probably stay here for two days since it is such a large area and has been recommended to us as a potentially rich bryophyte locality.