The Uptown Brass returns with your family’s favorite holiday tunes!

The rich sounds of brass instruments fill the air with festive selections of classical and popular holiday favorites performed by The Uptown Brass, a group of professional musicians who have been featured in venues throughout New York City.

The Uptown Brass is a group of professional brass musicians living in New York City. They first formed in 2007 and have since compiled a book of over 25 original compositions and arrangements. They have performed in many different NYC venues from recital halls and churches to children’s programs at schools and museums.

Individually, the members have played on numerous Broadway shows and regularly perform in concert halls and jazz clubs in New York and around the world with a who’s who of the music business. The list of sideman performances is too long to cover, but they include Diana Ross, Maynard Ferguson, the New Jersey Symphony, the Vermont Symphony, the Mingus Big Band, the Manhattan Brass, Josh Groban, Clark Terry, the Village Vanguard Orchestra, Ron Carter, the Dizzy Gillespie All-Stars, Kyle Eastwood, and many more. They have taught on the faculties of Hofstra University, the Peabody Conservatory, and the Brooklyn Conservatory.

Since December 2008, The Uptown Brass has had the great pleasure of rehearsing and performing for services at the Episcopal Church of the Intercession in Upper Manhattan. 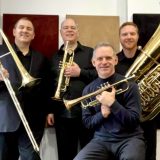