Posted in History & People , Inside our Collections on July 30, 2021, by Stephen Sinon 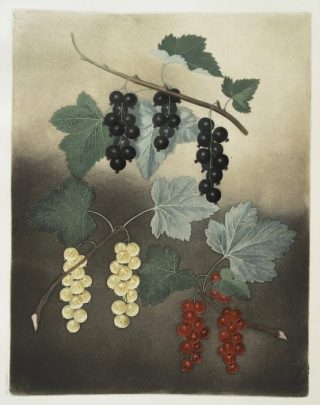 George Brookshaw’s (1751–1823) Pomona Britannica, a masterpiece of the printing arts, is widely considered one of the finest color plate natural history works ever produced. Intended to accurately record the best available varieties of fruit to encourage their cultivation, it was first published between 1804 and 1812 in a large folio version containing 90 plates depicting 256 varieties, and then in a smaller quarto format in 1816–1817 that contained 60 plates depicting 174 varieties. Both versions feature fruit then grown in and around London, especially at the Royal Gardens at Hampton Court and Kensington Palace.

The folio and quarto editions of Brookshaw’s work use the color-printed stipple method, which simulates the look of a watercolor painting in conjunction with the then relatively new tonal process of aquatint to stunning effect. The folio illustrations are placed against dark-colored backgrounds that make it seem as if the fruits could be lifted off the page. By comparison, the less expensive quarto edition prints appear more delicately rendered without being placed against colored backgrounds. The folio also depicts melons and pineapples which the quarto does not. The style of the quarto plates might be related to Brookshaw’s other vocations as a drawing instructor and designer of painted furniture. Images printed on light-colored backgrounds would lend themselves well to copying or serve as designers models.

At an early age George and his older brother, Richard, were apprenticed to Birmingham painter Samuel Troughton and taught the art of watercolor. After George married the daughter of a prosperous Birmingham gunsmith, the couple promptly moved to London where he set up a business as a cabinet maker in 1778 and produced designs for painted English neoclassical furniture. By 1783 he had attracted the patronage of the Prince of Wales and other prominent members of society; his furniture was noted for its all-over painted decoration with figurative landscapes and floral themes.

In 1795 he abandoned his wife and his cabinet making business altogether and supported himself as a drawing instructor. In 1797 he published anonymously the popular manual A New Treatise on Flower Painting; or Every Lady her own Drawing Master and two further companion volumes on painting birds and fruit.

The breathtaking and stylistically unique Pomona Britannica took Brookshaw nearly ten years to produce. Its only rival is perhaps The Temple of Flora by Dr. Robert John Thornton, which was created around the same period at a time when English publishers dominated botanical printing. Brookshaw’s elegant placement of the fruits on dark backgrounds is utterly unlike that of other botanical illustrations. Scholars believe that Richard Brookshaw, who was a popular mezzotint engraver in France, may have played a role in the illustration process.

The first folio edition of the work was dedicated to the Prince Regent, George Brookshaw’s most distinguished former patron. Unfortunately, Pomona Britannica did not attract the attention of the prominent botanists of the early 19th century, which may have been due to its exorbitant cost, decorative nature, and the fact that all of its subjects were already well known to science.