This is the first in a series of tributes to six curators at The New York Botanical Garden who retired recently but who are continuing their Botanical Garden-based projects and research as Curators Emeriti. 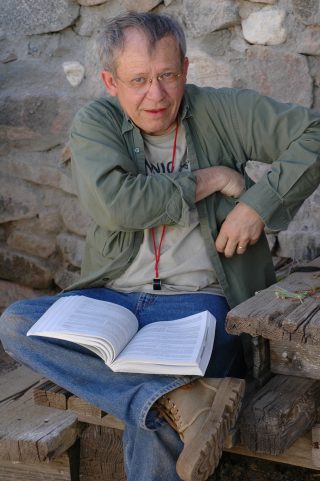 Dennis Wm. Stevenson has spent the vast majority of his long and very distinguished career at The New York Botanical Garden (NYBG), joining the staff in 1987 as Plant Morphologist and Director of the Structural Botany Laboratory. This fall, more than three decades later, he retired as Cullman Senior Curator and Vice President for Laboratory Research.

Dennis comes from a distinguished academic pedigree of outstanding plant morphologists (those who study the form, structure, and reproduction of plants). After receiving his bachelor’s degree from Ohio State University in 1970, he continued his studies there, earning his master’s degree in 1971 under the supervision of Richard A. Popham. He then went on to work with Ernest M. Gifford at the University of California, Davis, where he earned his Ph.D. in 1975. Dennis had two postdoctoral appointments. His first was a joint appointment at Fairchild Tropical Botanic Garden and the Cabot Foundation at Harvard University with P. Barry Tomlinson. His second postdoctoral appointment, funded by NATO, was at the Royal Botanic Gardens, Kew. Dennis was then on the faculty at Barnard College for seven years before permanently joining NYBG’s staff in 1987. He has remained at NYBG for the past 33 years in various leadership and research positions, including Vice President for Botanical Science from 2002 to 2007 and editor-in-chief of Botanical Review since 1992. One very significant contribution that Dennis has made to the preeminence of the Botanical Garden’s Science programs is through his interest in utilizing new technology for botanical research. He has introduced many new tools into the research programs at the Garden, especially in Genomics and the Cullman Program for Molecular Systematics. Today, due in large part to his efforts, NYBG is at the forefront of botanical research. 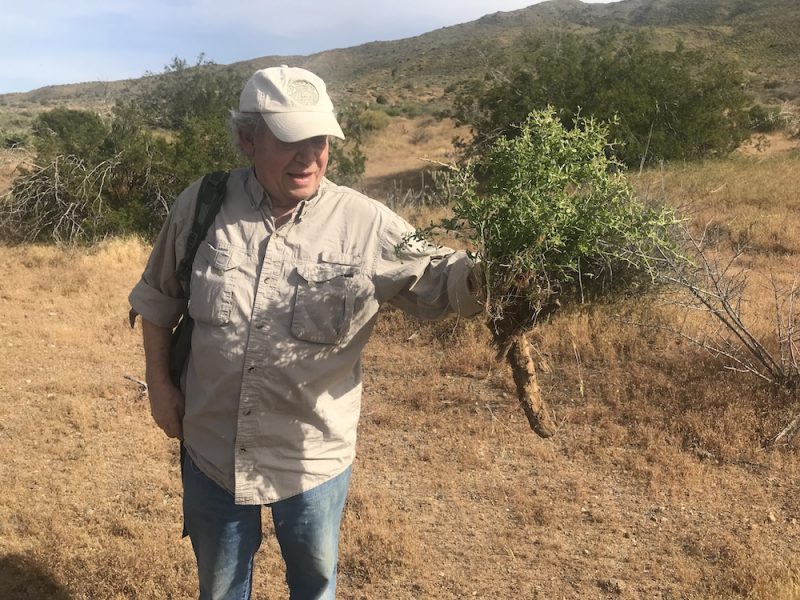 Dennis has had a prolific research career with an overarching interest in plant morphology and evolution. His primary research interests continue to grow and include diverse topics related to the biology of the cycads, the evolution of seed plants, and systematics of the monocots (flowering plants such as orchids, grasses, and palms). Dennis’s first paper, “The effects of temperature on seta length in Atrichum undulatum,” came out in 1972, and he has since authored or co-authored more than 350 publications. He has worked on a diversity of taxa and employed an impressive variety of techniques. Dennis has published papers on all major groups of plants, including algae, mosses, lycophytes, ferns, angiosperms, and gymnosperms. His expertise includes morphology and development, molecular systematics, taxonomy and nomenclature, paleobotany, genomics, natural products chemistry, and botanical history. He has written floras, monographs, and checklists, and he is the author of dozens of new species. Dennis never loses interest in a subject; he accumulates research projects and embraces every new opportunity. He is just as interested and knowledgeable about land-plant genomes—a recent project—as he is about the topic of the first paper he published.

Dennis’s achievements have been recognized nationally and internationally. He was awarded an honorary doctorate from the University of Naples, Italy; he is an honorary foreign fellow of the Linnaean Society of London; he was given a Centennial Award from the Botanical Society of America (BSA) in 2006; he received the merit award from the BSA in 2010; and his contributions to botany were recognized in a symposium at the BSA’s conference in Vancouver, British Columbia, in 2008 and later published in a special issue of Botanical Review as “A Festschrift on the occasion of Dennis Wm. Stevenson’s 70th birthday.”

Dennis has been successful in securing funding throughout his research career, receiving numerous grants from the National Science Foundation (NSF), Pfizer, Merck, Bristol Myers/Squibb, Texaco, and many private foundations. He received his first NSF grant in 1978 to study the comparative morphology and development of vegetative and reproductive shoots in cycads, and his research projects have been continuously funded since. As Vice President for Botanical Science, Dennis changed the culture at NYBG to incorporate NSF grants as an important piece of the fundraising picture. Today, our colleagues’ success with federal grants traces back to his influence 20 years ago. 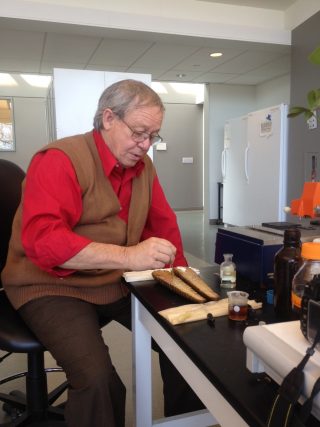 In the Laboratory, 2014. Photographer unknown.

Dennis thrives on collaborations with other scientists. He has organized or been involved in more than 37 symposia that have covered a range of topics. The first symposium was on the structure of the vascular system of ferns and related plants in 1982. Other symposia have included the morphology of gymnosperms (focus on cycads) and angiosperms (focus on monocots), phylogenetic systematics, biodiversity, and conservation.

Early in his career, someone advised Dennis to go to the library, and he did. He seems to remember every detail from 200 years of botanical literature. Dennis is a walking encyclopedia and is extremely generous with his time and knowledge. He has influenced every intern, student, postdoc, and visitor who has come to the lab; he is very proud of his students and junior colleagues, keeping in touch with nearly all of them and believing that their accomplishments are more important than his own.

His passion for sharing is reflected in his influence on teaching, which has reached hundreds upon hundreds of students at all academic levels. His mind and office are an incredible resource for thoughtful and impactful teaching techniques, antidotes, and props that make life-long impressions on the students.

Dennis’s enthusiasm is undiminished, and he is more excited than ever about using new tools to explore important botanical questions. He feels he still has a lot more work to do, and we all marvel at his energy and devotion to botany.

While Dennis has officially “retired” from the Garden as Curator Emeritus, he will maintain his office at NYBG and continue his research projects in the coming years. The institution thanks Dennis for his many decades of service and the important role he has played in making NYBG one of the great plant research institutions of the world.