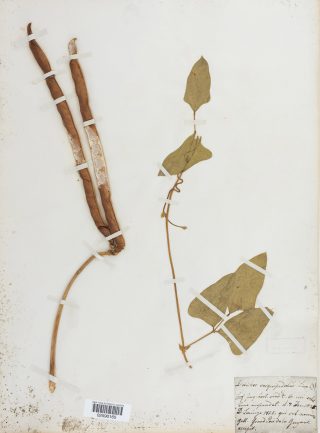 This is part three of a three-part series on cowpeas and the African Diaspora.

Unfortunately, many of the early written records of cowpeas in the Americas are ambiguous, either because the descriptions of the plants are insufficiently detailed to identify them or because the common names given—e.g., calavances; Indian peas; white, red, or field peas; or beans—were applied not just to cowpeas but to a range of other cultivated pulses, such as chick peas (Cicer arientinum), hyacinth beans (Lablab purpureus), pigeon peas (Cajanus cajan), broad beans (Vicia faba), and common beans (Phaseolus vulgaris). The last of these is a native domesticate of the New World that has been cultivated among Native Americans for thousands of years; it encompasses a particularly diverse range of cultivars and common names and can be easily confused with cowpeas. Consequently, records that were accompanied by detailed illustrations or preserved herbarium specimens may be especially valuable for accurate documentation of the historical spread of particular species and cultivars. With this in mind, I searched the William and Lynda Steere Herbarium of The New York Botanical Garden, where I work as a researcher of wild legumes, for early specimens of cowpeas. I also made a preliminary search of several online data repositories that host digitized specimen data (specimen images and collection data written on specimen labels) from other institutions.

The oldest specimen of domesticated cowpea that I found in the Steere Herbarium was made in 1825 from a cultivated plant in the Botanical Garden of Vienna, but the hand-written label on the specimen implies that it was grown from original stock described by the prominent 18th- and early 19th-century botanist Nicolai Joseph von Jacquin in his Hortis Botanicus Vindobonensis, published in 1770. In Jacquin’s description of the plant, he writes that it was collected in the Americas. The specimen appears to be one of the climbing red-seeded cultivars, similar to the Sea Island red pea of the Carolinas, but an annotation in French on the specimen reads “Gran Pois de la Guyane,” suggesting that the original stock came from the colony of French Guiana, located along the northern coast of South America and now an overseas territory of France. If further research confirms this hypothesis, it would constitute a very early, perhaps first record for the territory.

In the database of the National Museum of Natural History, France, I found an image of a specimen collected in Rio de Janeiro, Brazil, in 1767 by the French naturalist Philibert Commerson, who accompanied Louis Antoine de Bougainville during his circumnavigation of the globe in 1766–1769. The specimen is clearly a type of cowpea, although the immature pods make it difficult to identify the cultivar. A note on the specimen label implies that it was found in cultivation. Unfortunately, Commerson died only a few years later, and his collections fell into relative obscurity. That may account for this early record for Brazil having been overlooked.

The oldest specimens that I found online were three at the British Museum of Natural History, London, collected in 1687–1688 by Hans Sloane in Jamaica. Two of these were the basis for the previously mentioned illustration published in his book A Voyage to Jamaica and referred to as “calavances,” which his description makes clear are a type of black-eyed pea.

The third specimen, however, is Sloane’s “Jamaica red pease.” That specimen, which is remarkably preserved given that it was collected over 330 years ago, was clearly the model for an original illustration housed in the same herbarium, of which the published illustration in Sloane’s book is a slightly modified copy. Dr. Ina Vandebroek, Ph.D., expert in Caribbean ethnobotany at the University of the West Indies-Mona, told me that today in Jamaica the common name “red peas” usually refers to kidney beans, the red-seeded variety of the common bean (Phaseolus vulgaris); these are used in many Jamaican dishes, but especially in the typical Sunday dinner “rice and peas.” Indeed, looking just at the illustration, it seems possible that the plant depicted is a type of a common bean. However, the relatively great number of seeds in the pod, as suggested in the illustration by the many swellings along the pod length, is more indicative of cowpea. Moreover, examination of the specimen shows that it has basally spurred stipules (paired leafy appendages at the bases of leaf stalks) and persistent, broad, relatively blunt-tipped stipels (smaller leafy protrusions attached to the leaf stalk at its apex and just below the leaflets). These structures, which were not depicted in the illustration or mentioned in Sloane’s description, are both characteristic features of cowpea that serve to distinguish it from common bean. This establishes that at least two distinct cultivars of cowpea were grown in Jamaican plantations by 1688.

This cursory survey of just a few herbaria suggests that natural history collections, although often connected to a shameful history of racism, slavery, and colonialism, can be a valuable asset for those wishing to retrieve forgotten historical details that bond them with their ancestors and the plants they cultivated.

Falconbridge, A. (1788). An Account of the Slave Trade on the Coast of Africa. J. Phillips, London.

Hughes, W. (1672). The American Physician; Or, A Treatise Of The Roots, Plants, Trees, Shrubs, Fruit, Herbs, &c. Growing in the English Plantations in America. Describing the Place, Time, Names, Kindes, Temperature, Vertues and Uses of them, either for Diet, Physick, &c. William Crook, London.

Wight, W. F. (1907). The History of the Cowpea and its Introduction into America. United States Department of Agriculture, Washington, DC.