Ursula Chanse is Director of Bronx Green-Up and Community Horticulture at The New York Botanical Garden. 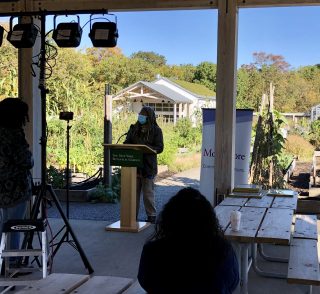 On October 17, NYBG’s Edible Academy was honored to host the first part of the Food Justice Webinar Series, which highlighted the coordinated community response to food insecurity in the Bronx since the start of the COVID-19 pandemic as well as recognized the history and contribution of Bronx community gardens and farms through the lens of NYBG Trustee, farmer, and activist, Karen Washington. This event was organized by the Steering Committee of the #Not62 Campaign for a Healthy Bronx, the Office of the Borough President and NYBG.

Karen Washington, as the keynote speaker, called on all to “… come together to fight the injustices we see and to fight to end hunger and poverty.”

“I’m just one person trying to make a difference in my neighborhood,” she said. “I have seen hunger. I’ve seen poverty. I’ve seen displacement. But I’ve also seen compassion, empathy, resiliency, hope, strength, and most of all, devotion. Too often this borough does not get its just due. I saw how plain, ordinary people stepped up to do extraordinary work, making sure that our people—the people of the Bronx—were fed. Long live the Bronx. Viva el Bronx.”

Ms. Washington was celebrated for her enduring work and activism in the Bronx with the presentation of a Proclamation by Bronx Borough President, Ruben Diaz, Jr., declaring October 17 “Food Justice Day” in the Bronx in her honor.

Panelists including Dennis Derryck of the Corbin Hill Food Project, Frankie Pimentel of the National Supermarket Association, Mike Hurwitz of GrowNYC, Frank Marte of the Bodega Association USA, and Gladys Roman of Manna of Life Ministries provided insight into the challenges and dedication involved in the ongoing efforts to bring fresh, healthy food to families in the Bronx during this pandemic.

The event closed with an Awards Recognition where several entities received citations of merit from the Office of the Bronx Borough President: the Bronx Community Farm Hubs (which include the 18 community gardens and farms that make up the program), Corbin Hill Food Project, Grow NYC, Mary Mitchell Family and Youth Center, Montefiore Health System, and NYBG’s Bronx Green-Up and Edible Academy.

View the first part of the Food Justice Webinar series here. Part 2 of the series took place Monday, November 23 and focused on a discussion and critical examination of current food policies and what changes need to be made to provide equitable access to healthy food. To view this webinar, you may access it here (enter passcode !jW44^d3).