Posted in Environment & Conservation , Plant Science on May 22, 2020, by Lawrence Kelly 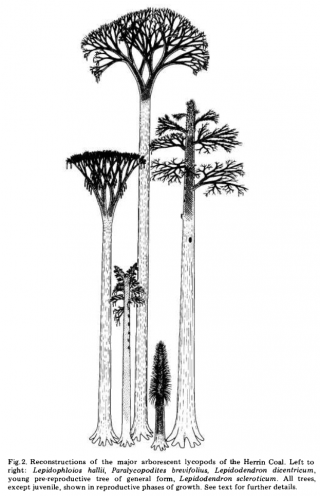 The International Day for Biological Diversity, which is today, is an especially important occasion to appreciate Earth’s biodiversity and yet acknowledge that many plants and animals face extinction unless we take action to save them. One way to better understand this peril to existing species is to learn as much as possible about past extinctions, and a logical starting point is to compile a list of plants that have gone extinct in recent history. As two recent studies show, however, that is not an easy task.

Some extinctions are well-documented and easy to demonstrate. For example, the giant lycophyte Lepidodendron was a 100-foot-tall clubmoss that was dominant in the fossil record during the Carboniferous period but then disappeared about 200 million years ago. Apart from famous and well-known ancient extinctions, scientists face a number of challenges when researching past extinctions. To start, we don’t know how many species of plants there are on Earth. Many of my colleagues cite a figure of approximately 400,000 species of land plants, with some 80,000 species yet to be described. Only last year, Douglas Daly, Ph.D., NYBG’s B. A. Krukoff Curator of Amazonian Botany, described 19 new species from a single genus in the frankincense and myrrh family (Burseraceae), contributing to an approximate 2,000 new species described by botanists every year. Some species will undoubtedly go extinct before we even know they exist.

Limiting the focus to the species we know, researchers would start to compile a list of all recent plant extinctions by studying the botanical literature that includes summaries of the conservation status of plant species, ranging from widespread to endangered or, in some cases, presumed extinct. They would also consult the Red List maintained by the International Union for Conservation of Nature. Unfortunately, the Red List, the world’s most comprehensive inventory of the global conservation status of plants and animals, is available only for select groups of plants (e.g., orchids, palms, and cycads). Guided by the literature, researchers would definitely want to check the most important herbaria in the world.

The authors of a recent study1 did all of this, and more, in an effort to document plant extinctions in the past 250 years. They found evidence of approximately 600 plant extinctions globally, which represents an extinction rate that is 500 times faster than the baseline rate (the rate at which plants would disappear without human influence). The results included an estimated 38 extinctions in North America alone.

To test the quality of the study’s data, a second group of authors2, including Robert Naczi, Ph.D., NYBG’s Arthur J. Cronquist Curator of North American Botany, looked closely at the North American extinctions on the list—a small but relatively well-understood portion of global plant diversity. Careful scrutiny of the North American records found that 14 species reported as extinct in the first study were still extant, but the second set of researchers also uncovered an additional 42 extinctions that were overlooked in the original analysis. It is easy to understand how that could happen in a less-than-complete search of the millions of collections records and hundreds of thousands of potentially relevant research articles published over the past 200 years. 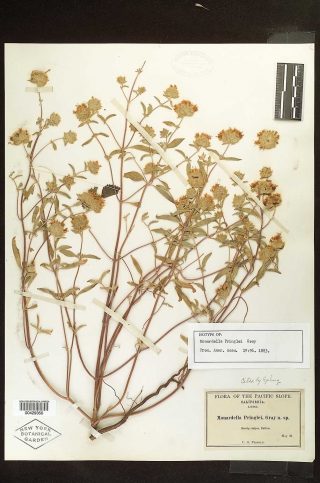 Monardella pringlei, an extinct species of North American mint. This herbarium specimen was collected in 1882 and eventually deposited in the William and Lynda Steere Herbarium.

Also worth noting is that the results of the second study include 14 subspecies and varieties of species, known as infraspecific taxa. In fairness, these were not considered in the original analysis. However, it would seem important to include them in a study of plant extinctions because they have unique features and may represent genetically distinct entities.

In any case, the second study raises the revised extinction total for North America from 38 to 53 species (67 total taxa including infraspecific taxa). Careful scrutiny of global records may reveal similarly underestimated numbers of extinct species in other regions of the world. We may not really know how many plants have gone extinct in the past 250 years, but we see some indications that the number is very likely to be considerably more than the 600 cited in the original study.

In the words of the senior author of that paper, plant extinction is bad news for all species. All life on Earth depends on plants, which provide the oxygen we breathe and the food we eat. Plant extinctions can lead to a whole cascade of extinctions in other organisms that rely on them, for instance insects that use plants for food and for laying their eggs. Both studies represent significant steps toward achieving a better understanding of extinction as an important dimension of plant diversity.

You can find other recent research publications by NYBG scientists here.