João Araújo, Ph.D., is Assistant Curator of Mycology in the Institute of Systematic Botany at The New York Botanical Garden. 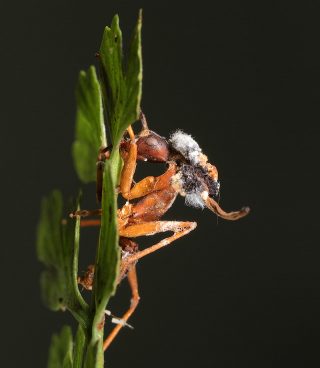 Ants are ubiquitous organisms, commonly found throughout tropical forests worldwide. They make colonies that range from a few individuals up to millions. And although they make up roughly 2% of nearly a million species of insects described, ants are estimated to comprise four times the biomass of all vertebrates on Earth combined. Such dominance, not surprisingly, exposes the ants to a broad range of pathogens—especially fungal parasites.

Among those are Ophiocordyceps, the intriguing “zombie-ant fungi.” These “zombie-maker” fungi are currently comprised of approximately 35 species occurring abundantly in Tropical forests, but some of those are also found in Temperate ecosystems. They have the ability to penetrate through the ant’s cuticle and overcome its immune system, which is achieved about a week or two after infection. Further, once the fungus has established inside the ant’s body, it multiplies as single yeast-like cells that spread throughout the insect. When the poor ant is heavily colonized by the fungal cells, it starts to behave oddly.

The zombification has started. 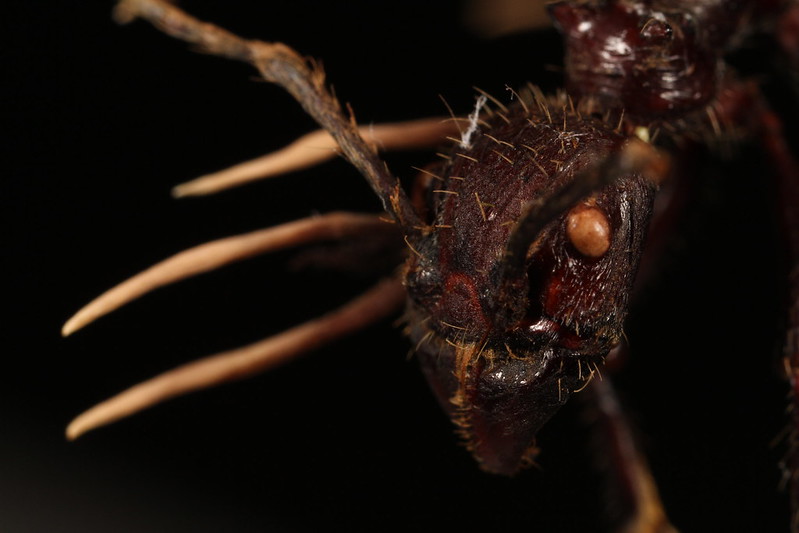 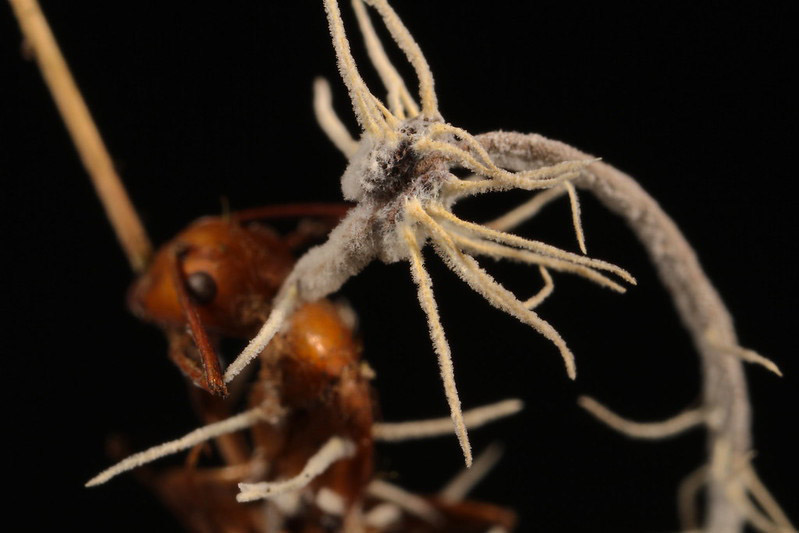 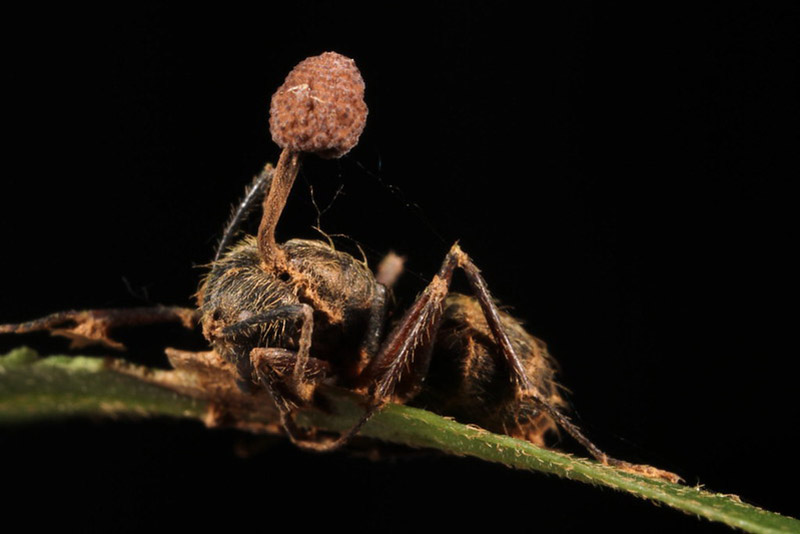 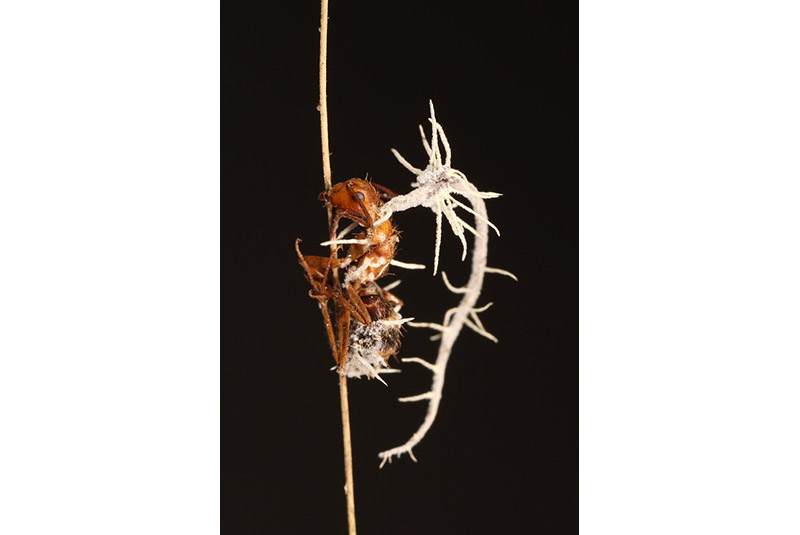 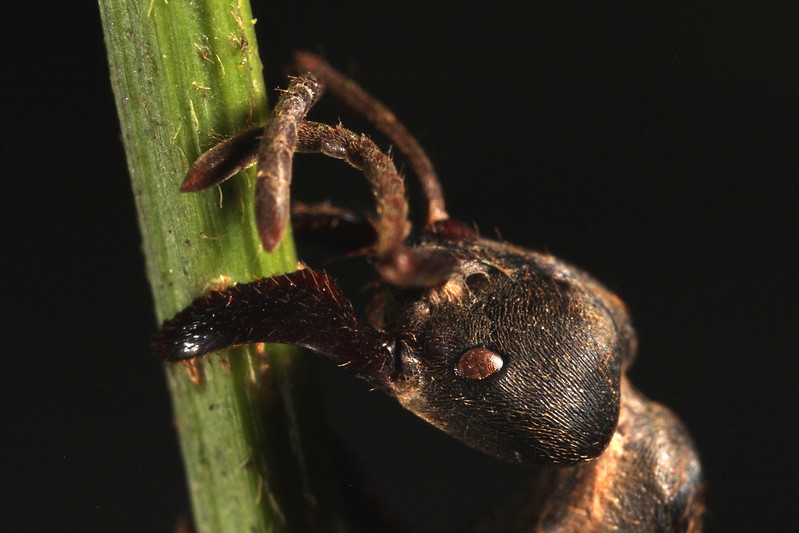 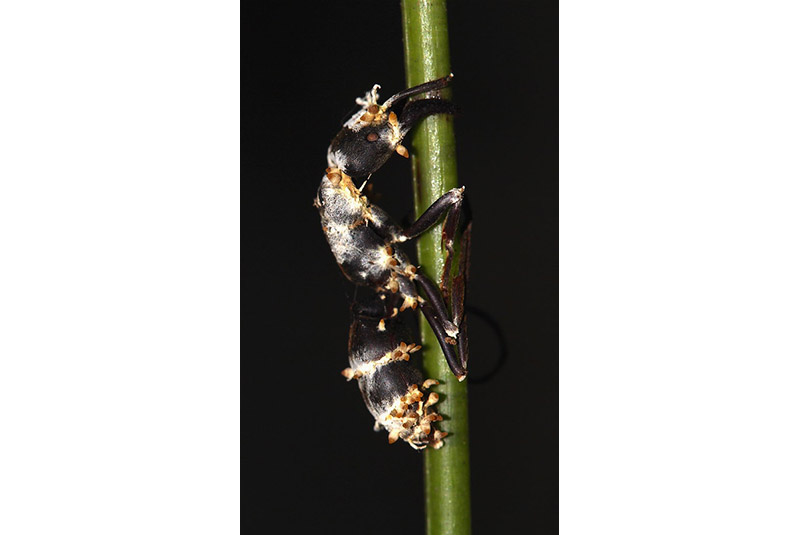 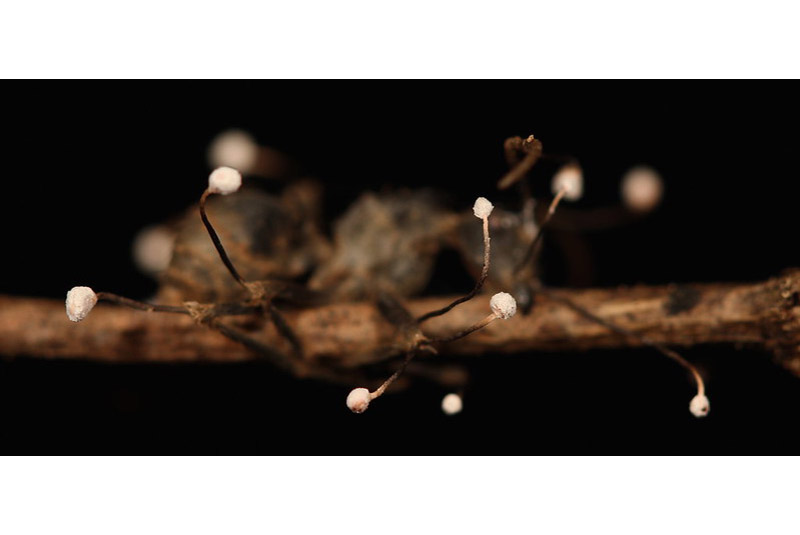 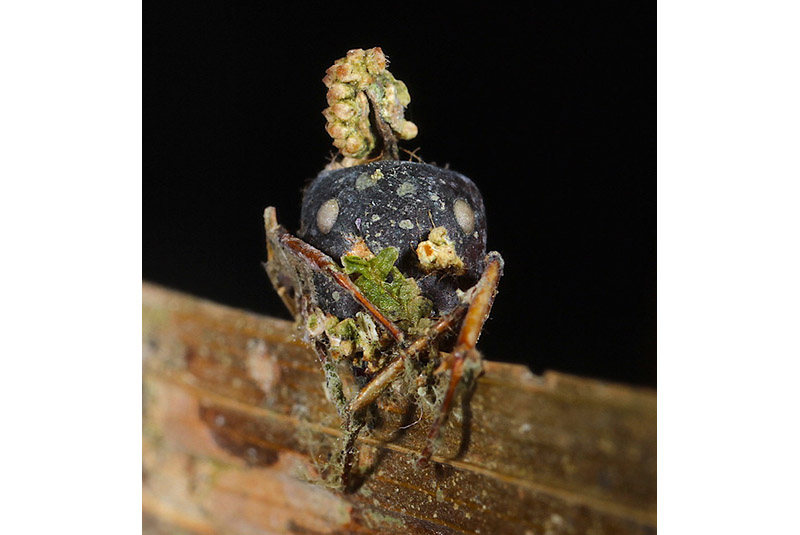 The following hours are followed by dramatic changes in the ant’s behavior, including the desertion of its nest to seek out a higher location in the forest. The moribund ant is led by the fungus to climb up onto plant parts such as leaves and spines, where it will spend its last hours while the fungus consumes its organs. Once the ant has reached a proper location for the fungal development, the parasite will finally command the ant to bite tightly onto the plant that will serve as the ant’s grave. That same location will be the platform from which the fungus soon shoots its spores.

Once the ant is fixed to the plant substrate and dies, the yeast-like fungal cells start connecting to form chains, similar to a necklace of pearls, that will later become fungal filaments. This new arrangement serves as highways that will transport all resources drained from the ant’s organs toward the back of the ant’s head, where the fungal fruiting body finally erupts. It can take from a few weeks for Amazonian species to a whole year for South Carolina species before the fungus is fully developed and ready to shoot the spores that will infect other ants passing by down on the forest floor. The zombification of new ants then proceeds. 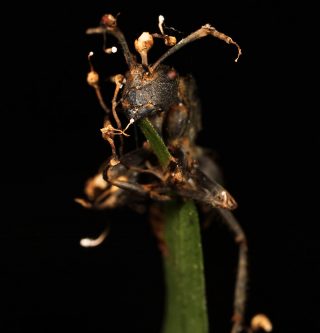 NYBG is now the headquarters for discoveries of new species of “zombie-ant” fungi and how they have evolved on a global scale. I myself first started working on these fascinating fungi back in 2010 during my Master’s research in the Brazilian Amazon, which continued through my Ph.D. studies on a cross-continental scale. Since then, I have described 27 new species and a new lineage that infects and controls the behavior of ants in Brazil, Colombia, the U.S., Ghana, Ethiopia, China, Australia, and Japan. We are now starting to understand how these intriguing parasites evolved, as well as how they diversified–but we are still far from understanding its full global diversity. I am confident that my work at the Garden will exponentially expand our knowledge about these fungi that are not only truly fascinating, but also potentially important for the future of agriculture and medicine, as both greener pest control agents and sources for new drug discoveries.