From the Field: Bill Buck in Cape Horn 2013, Day Eight

Posted in Bill Buck, From the Field, Science on February 28 2013, by William R. Buck 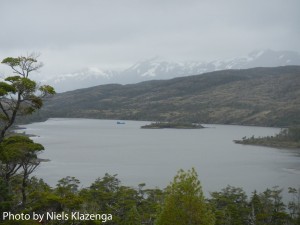 The boat starts moving at about 6 a.m. and we arrive at our destination at 7:30. We anchor between Isla Hoste and a smallish island with a big name, Isla Grande, in Ponsonby Sound. As usual, I picked out today’s locality almost by random on the map. The region is immense and we can only sample a very small percentage of it, so we try to find localities of various vegetation types and moisture gradients in order to find as much of the diversity as possible. And then we hope for the best!

This morning I am lured to a small dark-looking forest in a small cove on Isla Grande. The maps and the captain all indicate that there is no stream anywhere on this island. However, as we approach the shore, it is obvious there is indeed a stream–shallow, but by all indications a permanent watercourse. Within moments of walking up the stream–one of the many advantages of rubber boots–it becomes clear this is a nice site. It is a small, rocky stream heavily shaded by the mature southern beech forest. Since most of the rocks are bryophyte-covered, they aren’t slippery and so it is easy to make my way upstream. 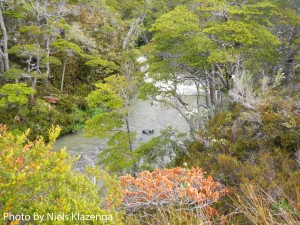 As soon as I see the stream ecology, I anticipate the existence of certain mosses. The two I most suspect of lurking nearby–Fissidens rigidulus (a widespread Southern Hemisphere species) and Cladomniopsis crenato-obtusa (a restricted regional endemic)–are also not common to the region. Thirty minutes into my collecting I still have not found either and I am getting a little discouraged. Nevertheless, I persist and finally, on a single rock in the middle of the stream, I find both growing together! This location is still in the area of our region that receives very high rainfall and so the bryoflora is still dominated by hepatics. However, it must be at least a little bit drier than the sites we were at further west (even though we are still very close to where we were yesterday) otherwise moss diversity would be even lower.

Eventually I come to where the stream enters the forest and the vegetation gives way to Magellanic tundra. At this point I start working back downstream on the other side of the water course. I am almost always the first one back to the retrieval site. This is largely because I hate to keep others waiting and would much prefer to wait myself. Working ahead of schedule also allows me to move more slowly than usual when the feeling strikes. I often just sit down on the ground–ah, the glories of rubber rain gear–and meticulously poke around, looking for exceptionally small bryophytes and lichens. Invariably a few gems turn up and these are the sorts of species (small in stature and meager in quantity) that few others either know to collect or would bother doing so. 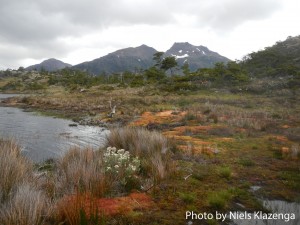 Near midday all the groups return to the ship for lunch. Blanka, Juan, and Laura decide to spend the afternoon at the microscope photographing oil bodies from the previous day’s haul. I am somewhat hesitant to head back into the field because all my dryer space is already occupied with wet collections. However, I don’t really feel like loitering on the ship and so I suit up. A small forest across the sound on Isla Hoste looks alluring and so I decide to go out with the aim of not collecting anything but species of special interest, and not in large quantity.

The zodiac first drops John off toward the base of a large series of cliffs. Niels, Paddy, and I are dropped off at a small peninsula at the forest I spotted earlier. Niels and Paddy chose to head toward the Magellanic tundra in hopes of finding Pararhacocarpus patagonicus, another regional endemic genus which Blanka had found and showed them earlier in the day. I start off as planned and spend a good 10 minutes collecting just a single lichenicolous fungus from the trunk of a coastal tree. It was the first Nectria parasite I have seen down here. 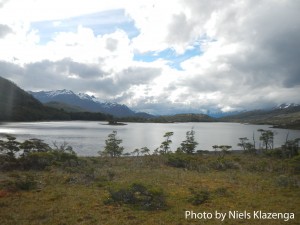 The forest–which is mostly old, large fallen trees–proves surprisingly interesting. It was easy to tell which trees had fallen recently by their lesser bryophyte cover. For the first hour I plod along collecting only a handful of specimens as planned. I keep hearing the sound of water, but every time I listen more closely, I decide it is just the wind. And then I realize it is water and that I am only about 10–15 yards away. However, to get there I must climb over or under at least a dozen fallen trees. But immediately I decide that this is promising habitat and check my watch to know how long I can spend which turns out to be only 30 minutes, so I start surveying the area.

The most unusual habitat seems to be two recently fallen trees and their upturned bases. There is very little bare soil in this region, so to see two large tree bases with mostly bare soil on them, promises to be interesting. Right away I find a propaguliferous Pohlia (I think this must be the same species we saw last year for the first time) and a little Polytrichaceae. As I continue to look I am startled to see a very small patch (just two immature capsules) of Trematodon. This is a genus new to our flora and the nearest Chilean record of it is hundreds of kilometers north. I unsuccessfully look for more. This will be one of the first mosses I put under the microscope when I get home. I spend most of the rest of my time in looking for Distichophyllum dicksonii, which grows on rotten logs embedded in hepatics with only the capsules showing. This forest looks perfect for finding them, but after over an hour of looking, I feel a bit defeated. So I turn to head for my rendezvous with the Zodiac. And then I look down. Eureka, there it is! My afternoon is a complete success. Not only do I find what I am looking for, I also get a genus new to the flora. 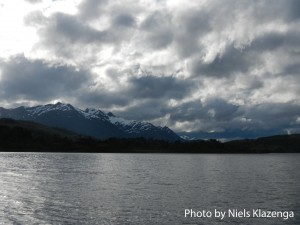 Although excited by my finds, I know full well the crew member driving the Zodiac will not appreciate my thrill. However, I am soon able to share my excitement with John when we pick him up, and then with the others when we return to the ship. The energy level among the oil body photographers seems low after slaving away at their microscopes all afternoon. Fortunately, an afternoon snack of fried bread is an excellent morale booster!

The weather again today is glorious. Most of the day was partially sunny and the few bouts of light rain were not enough to even fog up the handlenses. It was a bit cooler today, which is nice since it makes working in impermeable clothing more comfortable. Tomorrow we leave Ponsonby Sound and head south to Tekenika Bay. It is supposed to take about seven hours to reach there. The plan is to stay where we are until 3 a.m., presumably when the seas are calmer, and reach our destination at 10 a.m. As we move south, the climate gets harsher, so we’ll have to see if our luck with the weather will continue.