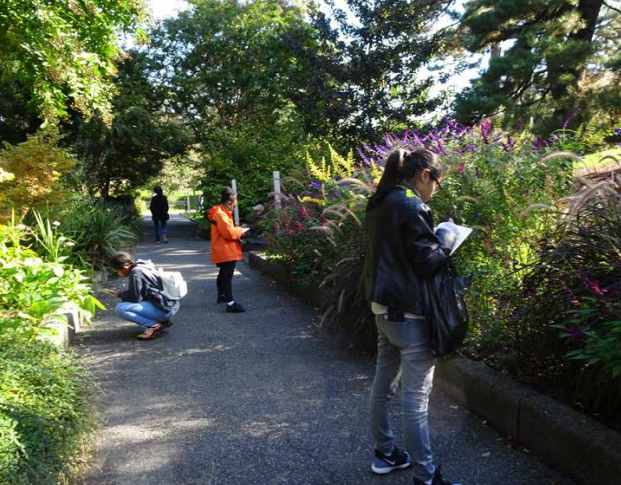 GEAR UP students document plants along the Ladies’ Border.

For over a decade, NYBG has partnered with Gaining Early Awareness and Readiness for Undergraduate Programs (GEAR UP) at the Bronx Institute at Lehman College, an initiative that provides early college awareness and education enrichment opportunities for middle and high school students in underserved communities. And in 2019, a multi-session fall science institute held in the Haupt Conservatory’s GreenSchool focused in on the core of the Garden’s mission of saving the plants of the world.

“A Call to Action: Protecting Earth’s Biodiversity” is the first of a series of institutes designed to move students into internships with Garden staff during the summer months, helping them build understandings about protecting our planet’s rich biological diversity and getting practical, hands-on experience in applied conservation.

In the course of the program, these young plant scientists kicked off their studies by collaborating on observations and documentation in the Ross Conifer Arboretum before returning to the classroom, where they compared their notes on different species and their features with those of 19th-century botanist John Torrey. This helped them recognize how access to high quality, observational recordings from the past is critical to understanding biodiversity today. Their efforts laid the framework for understanding ways to be keen observers and exemplify a standard for documenting their own observations during the rest of their studies.

“I understand the value of observations and how that importance affects studying biodiversity,” said a student from KAPPA International High School.

The Steere Herbarium became a place of study for students examining the history of plant conservation.

Among the fall foliage in the Nancy Bryan Luce Herb Garden, students created “My Life Map” to illustrate and compare the important events of the past that led each of them to GEAR UP and the Garden. Students also considered how these actions influence their college career paths. Having thus engaged in systems thinking and journeys, they then mapped out patterns they noticed among phenological phases and morphological features in the tender flowering plants from the Herb Garden to those found along the Ladies’ Border. They also found relationships between species while documenting the taxonomic ranks labeled on plant markers.

From the Nolen Greenhouses for Living Collections to the Native Plant Garden and everywhere in between, our 2019 students explored through NYBG’s collections so much of what makes our planet’s biodiversity precious and fascinating. They learned to identify many common native species of North American plants, and discovered the relationships they have with native fauna and other flora. They made native seed balls to distribute in their own neighborhoods.

Later, in collaboration with Herbarium staff, attendees created their own pressed plant specimens as an exercise in understanding how this archival material makes so much of our understanding of Earth’s biodiversity possible. 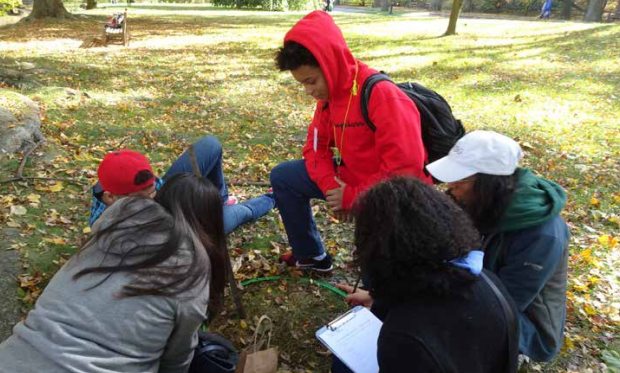 Students spent as much time in the field as possible, keeping field notebooks to document their discoveries.

“This day was helpful because it allowed me to understand a lot about my plant and its historical background,” said another student.

From keeping field journals to taking home plants to raise at home, GEAR UP students experienced the many fascinating and varied aspects of protecting Earth’s biodiversity. And further, they put themselves on the path to become the future of our planet’s conservation movement.

Despite COVID-19 and the Garden’s temporary closure, GreenSchool is committed to fulfilling its promise for providing summer internship experiences for students who successfully participated in one of the science institutes. To this end, students will have the opportunity to continue building their skills during a remote summer internship. Assignments will be flexible ad open to change based on the latest guidelines issued by the Center for Disease Control and Prevention (CDC), The New York State Health and Human Services and New York City and the personal comfort level of students and their families.