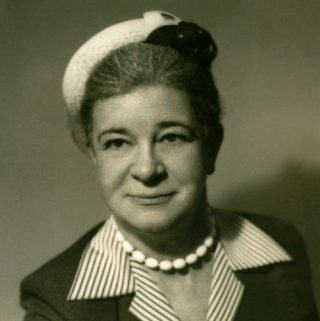 Hall was born in Meriden, Connecticut, in 1898, which is where I am writing this piece as we share the same hometown. She was a member of a prominent local family descended from Brenton Hall, first cousin of Lyman Hall, signer of the Declaration of Independence. She left Meriden as a teenager and went on to receive a BA in chemistry from Radcliffe College in 1921. After originally considering medical school, she applied for and received a full scholarship in 1924 for a two-year certificate program at the Pennsylvania School of Horticulture for Women (now part of Temple University).

After receiving her certificate from Ambler, she accepted a position in the occupational therapy department of the Pennsylvania Hospital for Mental and Nervous Diseases, where she was one of the first horticultural therapists in America. In 1926 she accepted the first of her library positions, in the children’s room at the Riverside branch of The New York Public Library. The following year she received her master’s degree in library science from the Columbia University School of Library Service. In 1930 she became the Librarian at the Horticultural Society of New York where she was able to combine her great passions: literature and gardening.

She began her 30-year-long career at The New York Botanical Garden in 1937 when she joined the staff as Head Librarian. Affectionately known as “Miss Hall,” she gave advice to tens of thousands via telephone and correspondence; was an active lecturer on many gardening and horticultural topics; taught adult education classes; led garden tours, and was a frequent contributor to library and gardening journals and newspapers, including The New York Times. As such, she was extremely influential in the contemporary American garden literature of the post-World War II period.

During her influential tenure as Head Librarian, she actively participated in the first major expansion of the Library Building, planning for the move of the collections into a newly constructed wing, which itself was the first major addition to the building since it opened in 1900. The new wing, named in honor of Board member Harriet Barnes Pratt, was inaugurated in 1966. The expansion of the Library footprint was much needed as the collections grew over the years alongside those of the Garden’s Herbarium, creating an enormous space problem. The Library collections would reside in the Pratt Wing from 1966 until 2002 with the opening of The International Plant Science Center wing.

Hall was appointed Sarah Gildersleeve Fife Research Librarian from 1960 to 1962. In 1944, Fife helped found the first club for women book collectors in New York City and was an active member of the Garden Club of America serving on many committees. She was chosen for membership in the Advisory Council of The New York Botanical Garden in 1936, becoming head of the council in 1940 until her resignation in 1948, whereafter she gifted her 440-volume library to the Garden along with an endowment.

Hall was promoted to Associate Curator of Education from 1964. Her experience with children’s librarianship led her to develop the Mertz Library’s children’s collection that now numbers 2,500 titles. After she retired from NYBG in 1967, she returned to the Horticultural Society to work as a volunteer cataloging their books and producing a list in 1970 in entitled Printed books, 1481-1900, in the Horticultural Society of New York. In 1968 she began collaborating with the Garden’s longtime Head of Horticulture, Thomas H. Everett, in the compilation of the monumental ten-volume work, The New York Botanical Garden Illustrated Encyclopedia of Horticulture. Together, they labored on the project for 14 years. In 1982 they created The New York Botanical Garden’s Plant Information Service, which continues to this day answering phone calls, letters, and e-mails, and accommodating walk-in visitors in addition to maintaining many online resources.

In 1969 The New York Botanical Garden honored Hall with its coveted Distinguished Service Award. It is noted that some 200 people attended her 90th birthday celebration held at the Garden in 1988, a year before her untimely death in 1989. In 2016 a statue in her memory was donated to the Meriden Public Library where it is now displayed.