The chrysanthemum—or kiku—carries a centuries-long history as a treasured flower and horticultural passion in Japan, representing the apex of a craft that demands precision, care, and patience. Our own kiku display is the result of all three: an exhibit of unparalleled beauty representing #plantlove in its truest form. Expertly trained NYBG horticulturists spend countless hours across 11 months nurturing and coaxing these chrysanthemums into both modern and ancient forms, including the sculpted curves and twists of the bonsai style; the colorful waterfall of Kengai (“Cascade”); the immense, demanding Ozukuri (“Thousand Bloom”); and more. 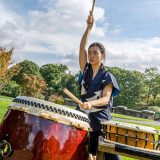 “The voice and spirit of the Japanese people” rings out in the Garden as taiko drummers create a thunderous soundscape of traditional percussion.

Taikoza has dazzled audiences worldwide with their electrifying performances since 1995. Drawing from Japan’s rich tradition of music and performance, Taikoza’s releases were nominated for best album for the 2004 and 2018 Just Plain Folks Music Awards. Taikoza has presented educational programs in Europe, Asia, and South America, and notable appearances include ESPN’s Sumo Tournament held at Madison Square Garden and NBC’s Thanksgiving Parade. 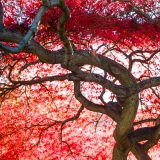 Complementing the petals of the kiku in the nearby Bourke-Sullivan Display House, sprays of bright red, yellow, purple, and orange make the Steinhardt Maples a must-see collection. These historic Japanese varieties greet fall with the vivid glow of their changing leaves, creating a sense of warmth as the weather cools.

Discover How the Exhibition Is Brought to Life

See the Final Tying of the Ozukuri

Sponsor
J.C.C. Fund of The Japanese Chamber of Commerce and Industry of New York