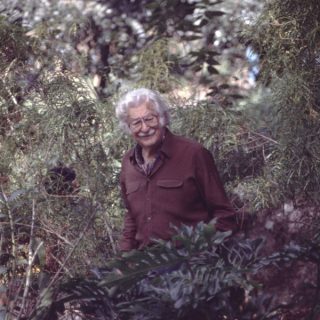 A photo of Roberto Burle Marx in Brazil, taken by his protegé, Raymond Jungles.

The recent report about the fires in the Brazilian Amazon compels us to reflect on how painful the Amazonian fires would have been to Roberto Burle Marx (1904–94), one of Brazil’s earliest and most important advocates for the rain forest and the subject of our current major exhibition, Brazilian Modern: The Living Art of Roberto Burle Marx.

A renowned landscape architect, Burle Marx was also a passionate, outspoken conservationist. His writings on environmental topics in Brazil—powerful when written a half-century ago—have a renewed, relevant resonance in 2019. For example, in Burle Marx: Homenagem à Natureza¹, he is quoted as saying, “You have to understand that it is my obligation to oppose everything that I consider an ecological crime … the sacrifice of nature is irreversible.” In 1969, he wrote: “This destruction [of forests] represents an attack on humanity, an affront to the sources of life, and an assured means of destroying future generations.”² A more powerful, fitting response to the news of the Amazonian fires could not be penned today.

The Amazon rain forest, the world’s largest tropical wilderness area, is frequently called the “lungs of the planet” because of the carbon dioxide absorbed by trees and the oxygen they produce. The reports about the fires in the Brazilian Amazon are sobering: the number of fires is the highest since records started to be kept in 2013 and an 83 percent increase over the same period in 2018.

The news is globally tragic in light of the dire predictions of changes in Earth’s climate and threats to biodiversity in recent reports and declarations from the United Nations, such as the IPBES Global Assessment Summary for Policymakers. Sixty percent of the Amazon rain forest is in Brazil, although it stretches across nine South American countries. It is home to 10 percent of the world’s species. At least 17 percent of the ecosystem has already been lost. The stakes are indeed high.

Here at NYBG, we read the news about the dramatically increased burning of Amazonian forests as a call to action, reinforcing the importance of our on-the-ground work in this area. We have been deeply engaged with plant research and conservation in Amazonia since the institution’s founding in 1891. Botanical research as carried out by NYBG scientists and our colleagues provides the scientific basis for knowing which plant species and which habitats in Amazonia are the highest priority for conservation. Such information can inform policies that maximize the vital role of Amazonian forests as carbon sinks and as safe havens for biodiversity. 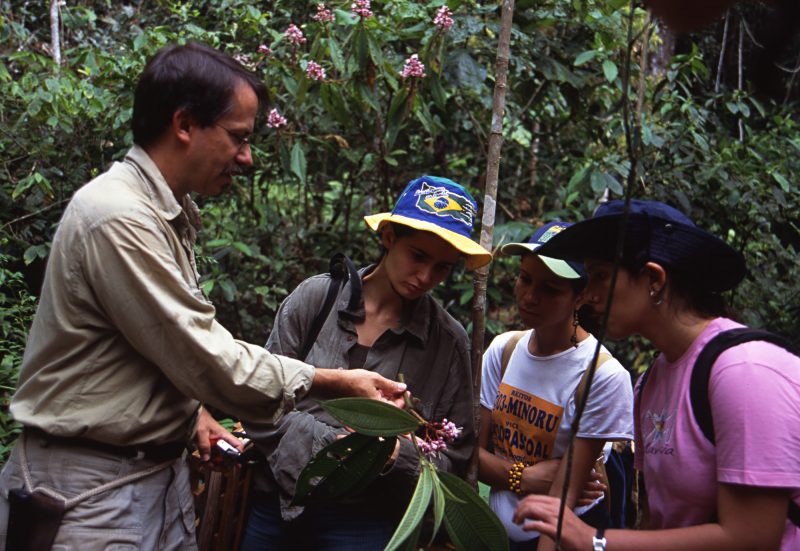 Within NYBG’s Center for Conservation Strategy, the region is designated as one of the Areas of Botanical Concern. Currently, there are five projects in NYBG’s Amazon program, led by Douglas C. Daly, Ph.D., the B. A. Krukoff Curator of Amazonian Botany and Director of NYBG’s Institute of Systematic Botany. Over the past four decades, Dr. Daly has led numerous plant collecting expeditions to Brazilian Amazonia, mentored many local Brazilian botanists and forestry professionals, and has engaged with the myriad conservation and sustainable development issues in partnership with colleagues in Brazilian Amazonia. Dr. Daly’s work stands to be a great help in the local response to the current crisis.

Finally, the record burning of Brazil’s rain forests underscores the urgency of the latest United Nations report issued earlier this month on the interrelated challenges posed by climate change and biodiversity loss. Entitled Climate Change and Land, the report notes that natural and managed lands absorb the equivalent of almost a third of carbon dioxide emissions from fossil fuels and industry, meaning that conserving the Amazonian rain forest is an important part of mitigating climate change. This massive report’s Summary for Policymakers is a good place to start reading and digesting its important findings and recommendations, which provide a roadmap for action. The current and prospectively more burning of Brazil’s Amazonian forests means action is even more urgent because, as Roberto Burle Marx reminds us, “the sacrifice of nature is irreversible” and “this destruction represents an attack on humanity.”