Posted in Inside our Collections , Plant Science on May 28, 2021, by Kristine Paulus 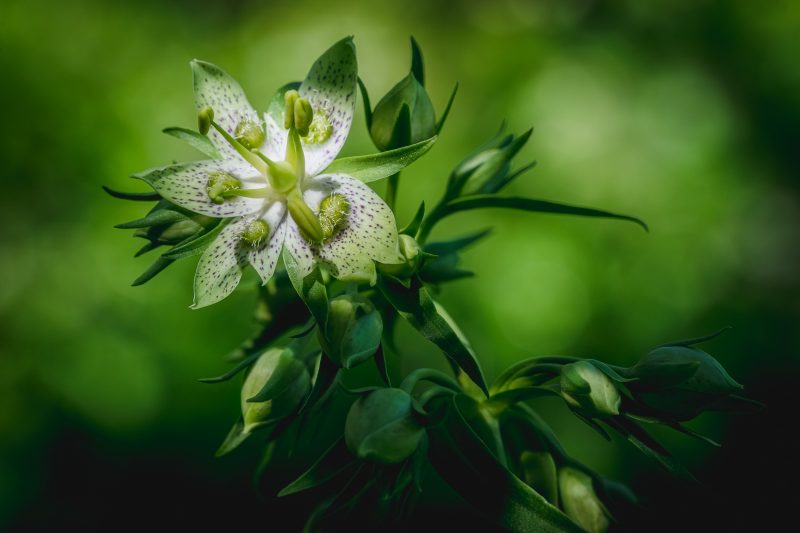 Frasera caroliniensis puts up a rare bloom in the Native Plant Garden.

On April 29, the Plant Records Office received a very excited e-mail from Native Plant Garden gardener John Egenes. Shortly after, we received another e-mail of a similar nature, this time from Michael Hagen, Curator of the Rock Garden and Native Plant Garden. Both messages contained multiple exclamation points, all of them warranted.

It was a rare plant alert, the absolute best category of communication.

They were notifying us that the elusive Frasera caroliniensis, growing in the glade section of the Native Plant Garden, was going to flower! Commonly referred to as American columbo, F. caroliniensis is native to southeastern Canada to the north-central and eastern United States, but it is uncommon and listed as threatened in New York State.

Green-gentian (another common name) spends most of its existence as a lovely but unassuming rosette of dark green basal leaves. It will grow as a low mound for many years, sometimes as long as 30, before flowering! The 26 Native Plant Garden specimens were planted in 2011 and went unnoticed by most until last month, when one plant suddenly shot up a flower stem for the first time. This will also be the last and only time it flowers.

Elkweed (yet another common name) has a monocarpic lifecycle, which means that it flowers once, then dies. The stalk is one of the tallest and can grow as high as eight feet. This unusual-looking wildflower has already bolted to a great height at nearly five feet. The leaves are arranged in an interesting whorled pattern, decreasing in size as the whorls ascend. The central stem is topped by a large inflorescence that has many branches, with typically 50 to 100 flowers per panicle. Each nodding flower has green and yellow petals with purple speckles. Each lobe has a fringed nectar gland, which feeds bees.

The senescence of the flowering stalk inevitably leads to the plant’s death. Plants which only breed once in a lifetime are termed semelparous. The infrequent flowering occurrences of Frasera caroliniensis make phenological observations few and far between, therefore this species hasn’t been studied in great depth. Horticulture staff plans to collect (hopefully) viable seed from the perfect flowers (also known as bisexual flowers) to grow for the next cycle of 10+ years. For now, in the Native Plant Garden, this extraordinary plant will only be in flower for a short while and we may not witness this phenomenal botanical tour de force again for some time to come.