Posted in History & People , Inside our Collections , Plant Science on November 27, 2020, by Ina Vandebroek 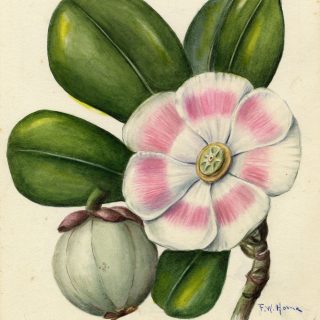 The New York Botanical Garden has a long and fruitful history of collaborative floristic research in Puerto Rico that dates back to the beginning of the 20th century. Around that time, the Botanical Garden’s co-founders, Nathaniel Lord Britton and his wife and lifelong collaborator Elizabeth Britton, who was a specialist in mosses, began making annual field trips to Puerto Rico and the Caribbean to study the region’s flora. Captivated by the beauty of Puerto Rico’s biological and cultural diversity, Dr. Britton proposed to establish a multidisciplinary research consortium in 1913, consisting of scientists from the Garden, the New York Academy of Sciences, Columbia University, and members of governmental institutions in Puerto Rico and the United States, to jointly study the botany, paleontology, geology, anthropology, and archeology of Puerto Rico. This collaboration was based on numerous field expeditions and culminated in the publication of 19 volumes published by the New York Academy of Sciences, of which volumes 1 to 4 are available online on the website of the Biodiversity Heritage Library.

As a result of his botanical surveys, Dr. Britton published the Botany of Porto Rico and the Virgin Islands in multiple volumes (Sastre-De Jesus and Santiago-Valentín, 1996). He went beyond documenting the island’s plant diversity to develop a forest policy plan for the Puerto Rican government, advocating for the urgency of reforestation and paving the way for modern conservation efforts. The tireless research efforts of the Brittons in Puerto Rico were recognized in the naming of Mount Britton, a double peak in El Yunque National Forest. Also, Dr. Britton’s name was engraved on the front of the old biology building of the University of Puerto Rico, together with the names of other famous scientists such as Linnaeus, Darwin, and Mendel, to honor his role in the development of the university. After his retirement in 1929, Dr. Britton spent his final years preparing the Flora Borinqueña, a work that remains unfinished. More details about his expeditions can be gleaned from his field records, which are available in the LuEsther T. Mertz Library’s Collectors’ Field Notebook collection.

As a legacy of Dr. Britton’s influential work, the Caribbean remains a priority floristic region and an Area of Botanical Concern for the Garden. Recent work related to the flora of Puerto Rico has consisted of digitizing the Garden’s collections of herbarium specimens. Once digitized, the C. V. Starr Virtual Herbarium shares these collections online with Puerto Rican and Caribbean colleagues, and with the entire world, thereby serving as a powerful tool for repatriating botanical knowledge while contributing to the documentation and conservation of the unique habitats and species of Puerto Rico and the larger Caribbean.

The Garden has also capitalized on Dr. Britton’s conservation work by conducting a rapid conservation assessment of 2,025 native plant species of Puerto Rico, whereby Garden scientists found that more than one fourth (28 percent) of the native flora is at some risk of extinction (Miller et al., 2012). Analyses such as these are invaluable to guide future floristic and ecological research on the ground and to develop conservation plans.

In addition, the Garden’s Institute of Economic Botany has an ongoing collaboration with the Puerto Rican community in New York City to document plants that are culturally important. Interviews with 100 Puerto Ricans revealed a list of more than 200 plant species that are used as home remedies or for spiritual well-being. The continued documentation of these plants and their associated cultural knowledge is important to preserve this biocultural heritage for future generations of Puerto Ricans.