Posted in History & People , Inside our Collections on December 3, 2020, by Stephen Sinon

The Lord & Burnham Company was the premier builder of glasshouse structures in North America during the 19th and 20th centuries. The firm’s largest project was the Conservatory designed for NYBG, today known as the Enid A. Haupt Conservatory.

When the firm was dissolved in 1987, their surviving business records were offered to the Garden and transferred to the care of its Archives. The collection is the only substantial archive of glasshouse architectural records extant in America, and the most significant of its type in the world, containing a trove of original materials for research on the heritage, technology, and design of historical glass structures erected in the United States. Documents in the collection are consulted regularly by architects, architectural historians, preservationists, contractors, landscape historians, and historic home owners.

In 1896, Nathaniel Lord Britton, founding Director of The New York Botanical Garden, along with the Board of Directors of NYBG, initiated plans for a Conservatory with extensive glass houses. At least two different proposals were offered. The proposals were presented as 50”x27” drawings done in watercolor with gouache highlights. One proposal included two watercolors featuring a Gothic revival stone entryway and a classical tower, perhaps to complement the nearby Fordham University structures. The winning design, selected by NYBG’s Board of Managers in 1897, was an Italianate Renaissance style with pressed metal classical friezes and composite columns that complemented the Beaux Arts design of the NYBG’s Museum Building. 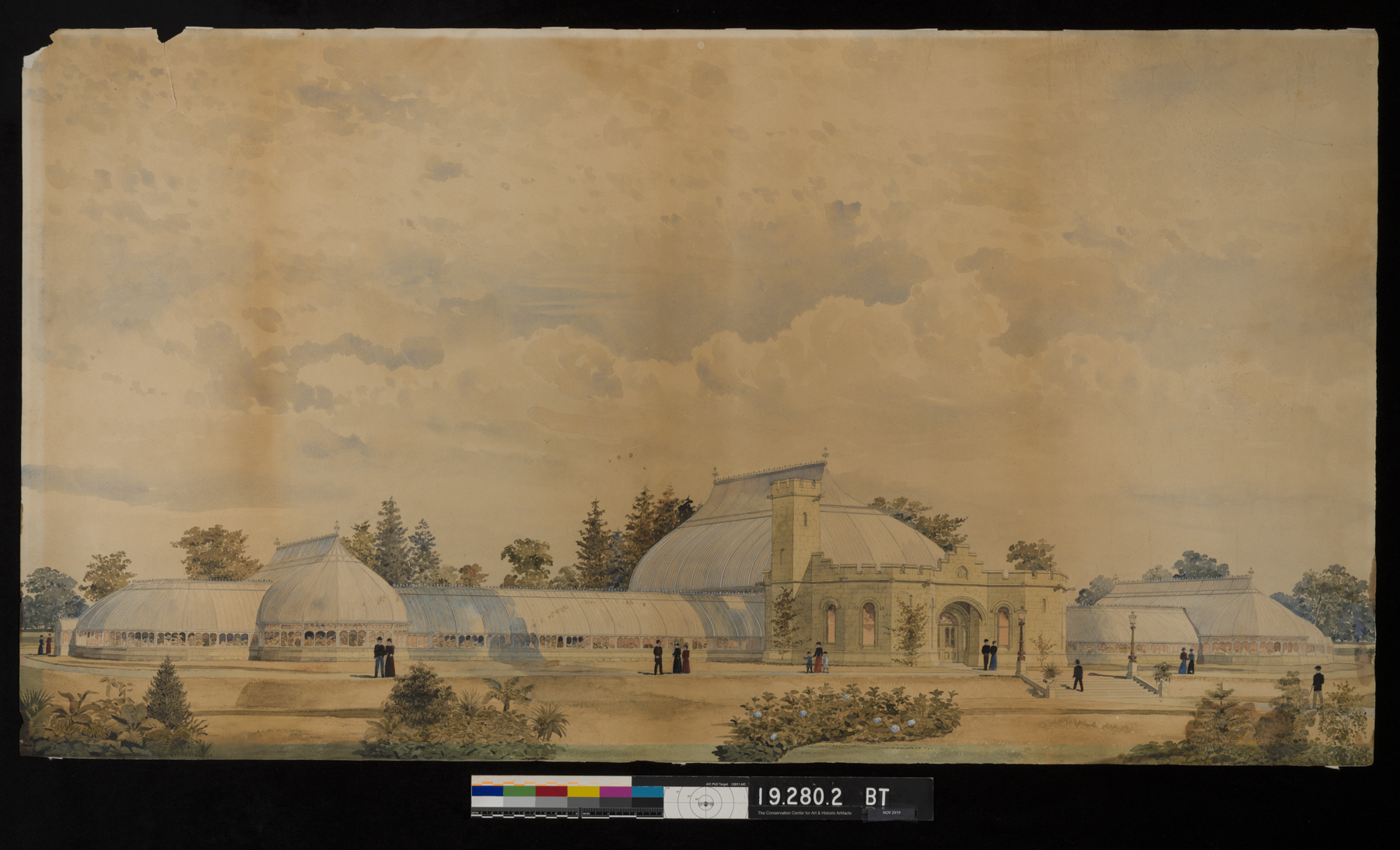 An early Lord & Burnham draft of the NYBG Conservatory featuring a stone tower, prior to restoration 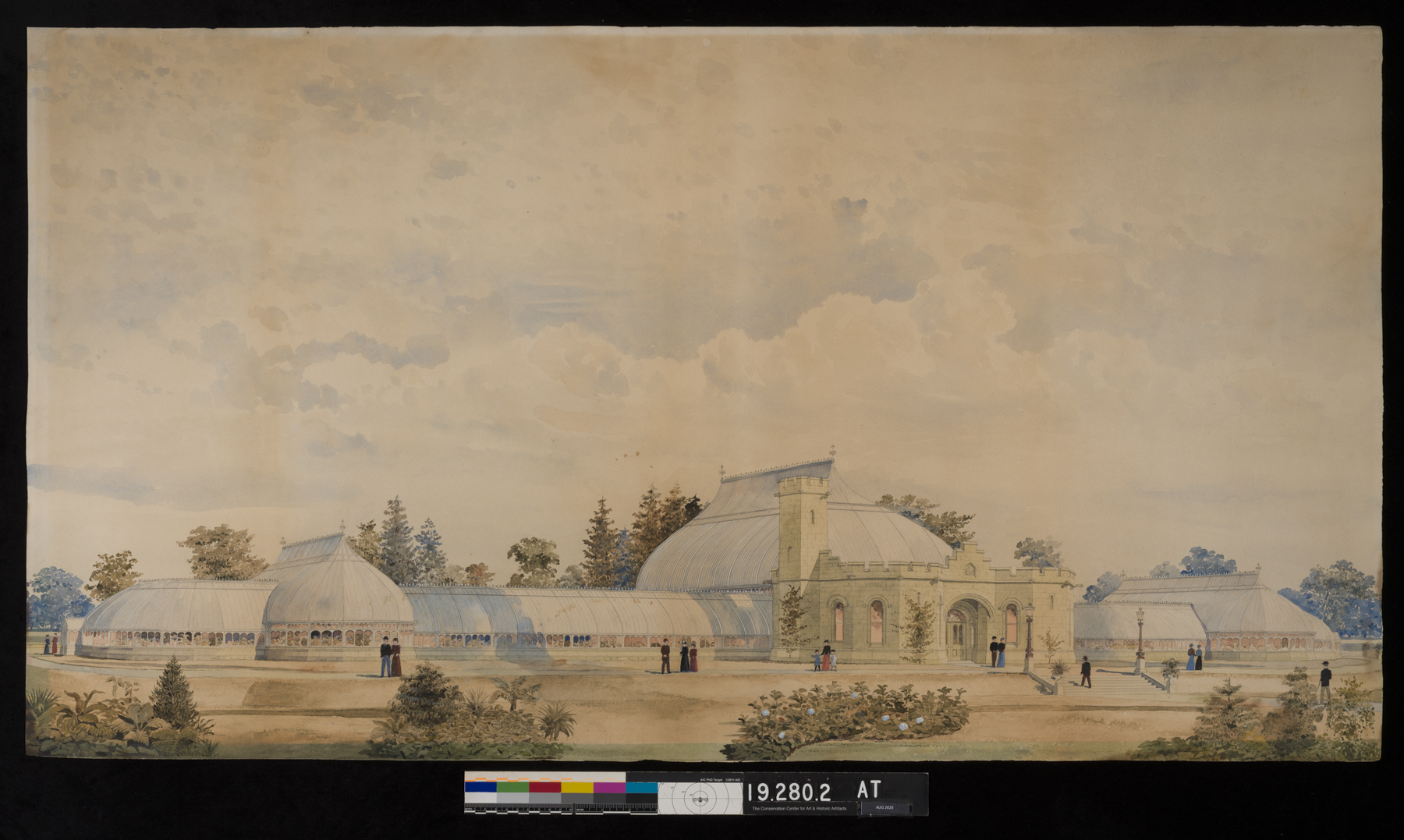 An early Lord & Burnham draft of the NYBG Conservatory featuring a stone tower, newly restored in the Mertz Archives

These presentation watercolors along with more than 216 drawings and blueprints pertaining to the NYBG’s Conservatory were a valuable and cohesive addition to the Mertz Library’s collections. These watercolors represent the only known surviving works of their kind to document a major American 19th-century glasshouse structure, the largest public conservatory built in the Americas.

With funding awarded in 2019 from the NYS Conservation/Preservation Discretionary Grant Program, the Mertz Library undertook a project to perform conservation treatment on these three large-scale, late-19th-century presentation watercolors. The drawings were in very fragile condition and at risk of further deterioration due to the brittleness of their supports, presence of large tears and punctures, stains, vulnerable flaking media with small areas of loss, and temporary housing.

The goals of the project were to stabilize the watercolor drawings both chemically and physically; provide sturdy matting for storage, safe handling, and display; and to provide safe, archival-quality boxes for permanent storage. Treatment on the drawings was carried out by the Philadelphia-based Conservation Center for Art and Historic Artifacts (CCAHA). Their processing included testing the stability of the media; consolidating vulnerable and flaking portions; surface cleaning the drawings; washing to reduce the soluble acids and discoloration; applying paper repairs and infilling losses; and hinging the drawings into exhibition mats with covers. 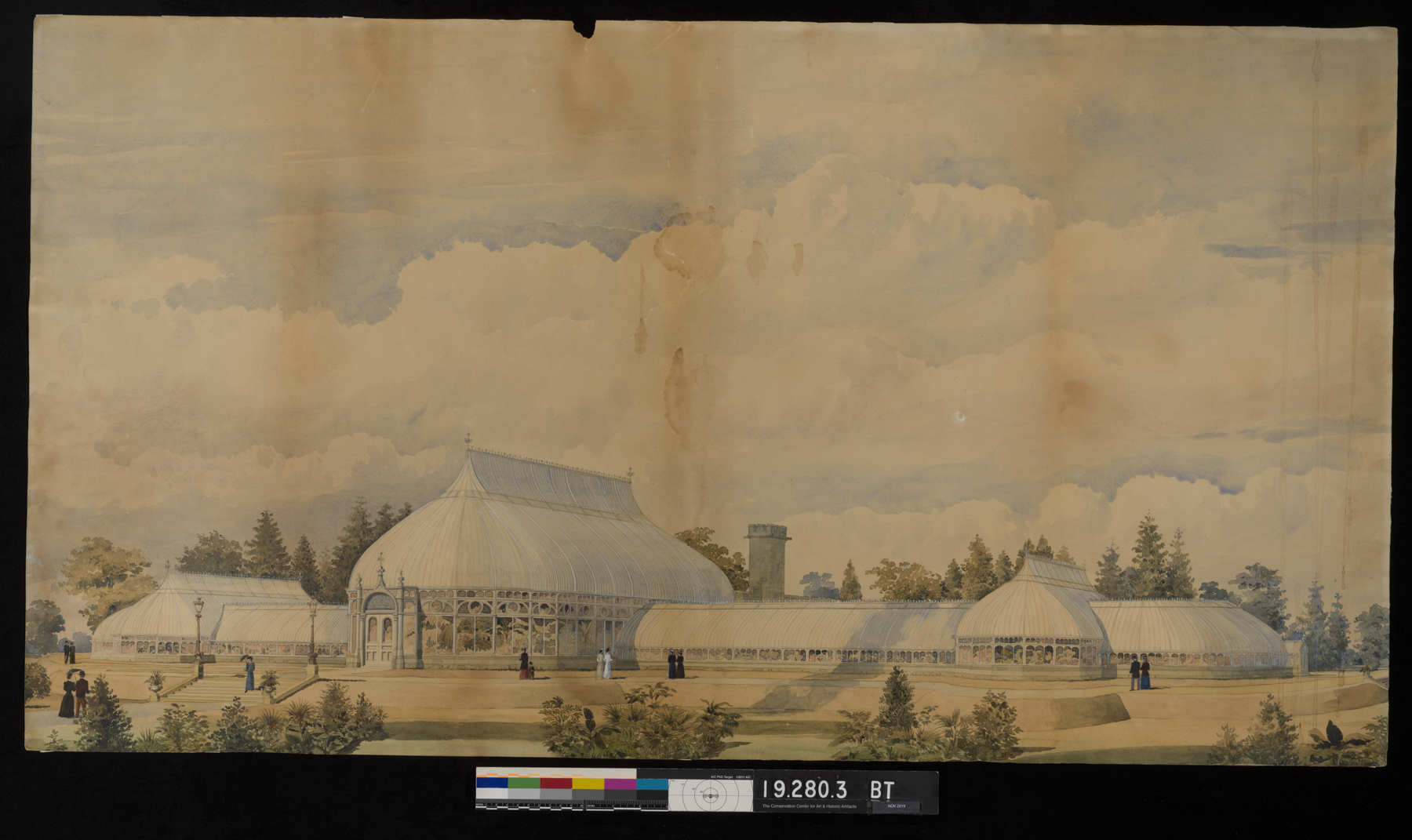 An early draft of the NYBG Conservatory prior to restoration 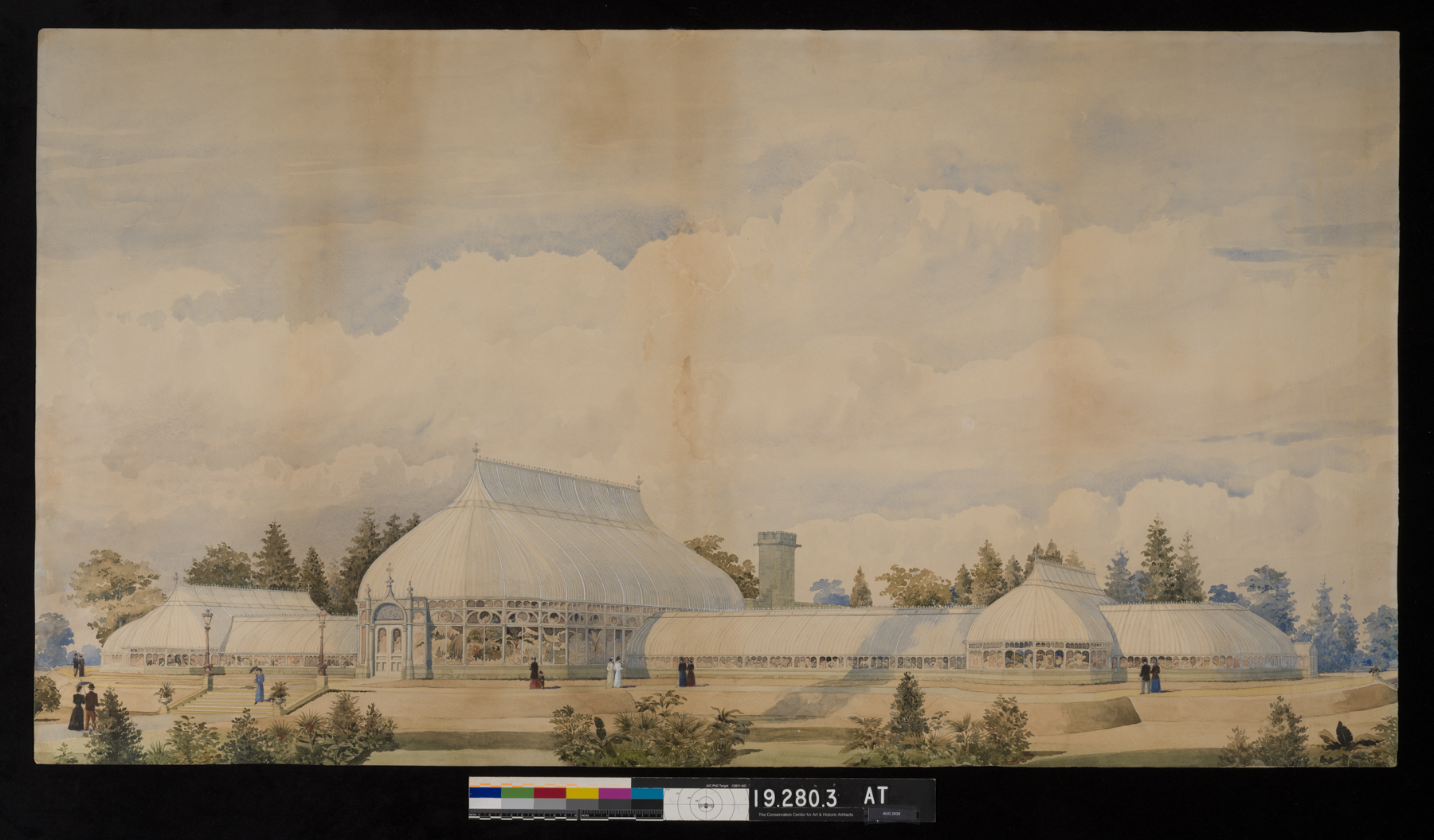 An early draft of the NYBG Conservatory after restoration

Existing correspondence found in the administrative records of the Garden indicated that the artist Edward Penfield, of Harper Brothers Art Department, was responsible for these presentation watercolors. Penfield was born in Brooklyn in 1866 and went on to a successful career as an illustrator for Harper Brothers (1893–1901), whose publications include the well-known Harper’s Weekly and Harper’s Bazaar. Penfield was also a book illustrator, mural painter and teacher of draughtsmanship, and went on to become President of the Society of Illustrators.

These architectural presentation watercolor drawings are an important part of The New York Botanical Garden’s history and its Enid A. Haupt Conservatory, which has since been designated a National Historic Landmark. They offer important surviving visual documentation for a major construction project commissioned by the City of New York and for the study of New York City’s Beaux Arts architecture, glasshouse design, public horticultural display, American architectural history, historic preservation, urban planning, American cultural and educational institution history, and many other cross-disciplinary research topics.

You can read more about the history of Lord & Burnham here.

The firm’s surviving records offer a look into the inner workings of the most prominent manufacturer of its kind in the great American industrial age of the late 19th century. In addition to correspondence, business records, and advertising artwork, there are thousands of plans and drawings for many clients around the country and the globe. The firm was a major employer in the Hudson River Valley area, where its headquarters were located, and had important Midwestern and Canadian manufacturing facilities as well.

NYBG’s collection of Lord & Burnham’s records is also a source for scholarship on the history, technology, materials, and techniques used by architects, engineers, artists, and designers to reproduce architectural drawings and prints. The Garden’s conservators have been awarded a series of grants to clean, inventory, and rehouse the Lord & Burnham Collection for the past three decades. A team of interns working on the collection eventually wrote a manual which was the first of its kind to help identify and care for architectural plans, extensively illustrated with examples from the collection and focusing on the century-long period between 1860 and 1960.