Posted in Behind the Scenes on May 28, 2020, by Vanessa Sellers and Samantha D'Acunto

Vanessa Sellers is the Director of the Humanities Institute and Samantha D’Acunto is the Reference Librarian at The New York Botanical Garden. 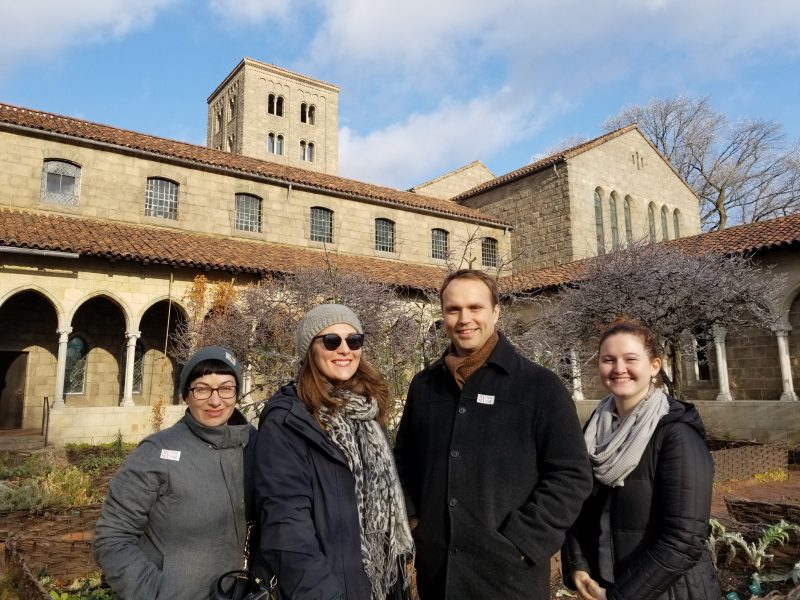 On December 18, 2019, the Humanities Institute Mellon Fellows along with staff from the LuEsther T. Mertz Library spent the day exploring the remarkable treasures of The Met Cloisters in Fort Tryon Park, New York, with the Director of the Humanities Institute, Dr. Vanessa Sellers. The halls of the museum were festively decorated for the holidays which provided an inviting atmosphere to tuck away from the cold winter afternoon.

After admiring the imposing setting of the Cloisters Museum high upon a bluff overseeing the Hudson River, Dr. Sellers toured us through the exhibit halls pointing out some of the highlights of the Cloisters collections and the impressive architectural features.

Three items particularly inspired conversation: The delicate carvings and craftsmanship of The Cloisters Cross, awed the group. Our admiration for the piece quickly faded, however, when we learned the cross was actually an artifact of anti-Semitic sentiment that consumed medieval England at the time. Learning this welcomed thoughts and comments from the group on propaganda ephemera and the prosecution of the Jews throughout history, particularly as the gallery that houses the cross was adjacent to the hall exhibiting the Colmar Treasure, a collection of jewelry and coins owned by a Jewish family who were part of a community that was persecuted during the Middle Ages. 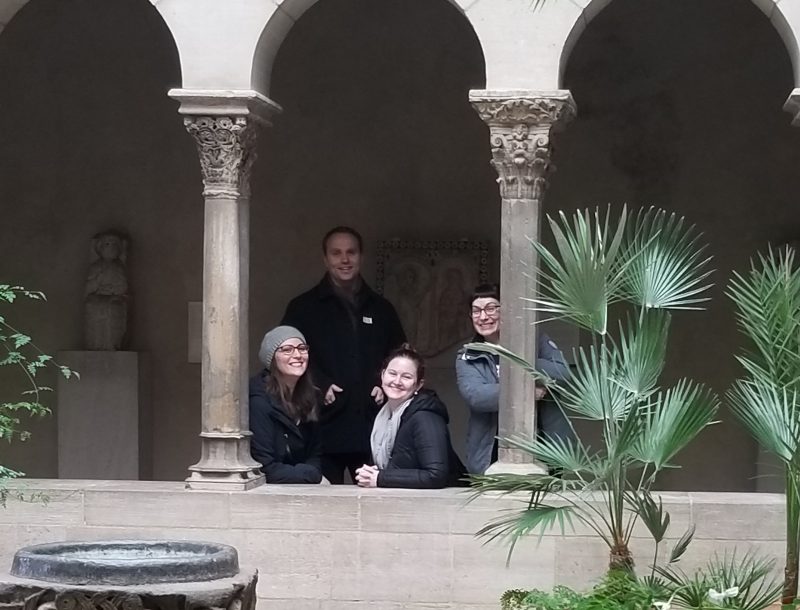 Looking through the columned arcade into one of the courtyards.

The conversation lightened as we made our way to The Unicorn in Captivity (from the Unicorn Tapestries). The botanical elements symbolizing marriage and fertility presented in the tapestry, organically started a conversation around the inspiration and importance of the natural world to art and other forms of expression. We eventually joined the other tourists who sought to locate the little frog hidden amongst the foliage in the tapestry. It took us a while to find it but we eventually did.

We couldn’t contain our surprise when entering the room with the Annunciation Triptych (Merode Altarpiece). Our delight for its beautifully painted panels and vibrant colors was paired with laughter as one of us pointed out the uncanny resemblance of the kneeling donor to one of the Mellon Fellows. 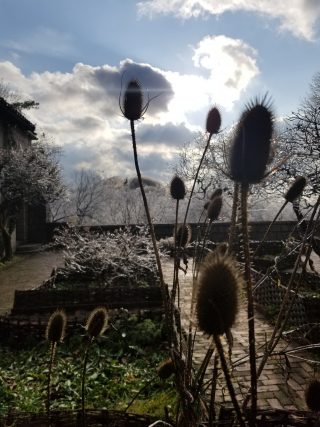 View of the Bonnefont Herb Garden

Though it was winter we made our way to the outside terraces containing the Bonnefont Herb Garden. Counting only on a few dried silhouettes, we didn’t expect to see much of the actual plantings. However, the mild winter allowed for some plants to thrive and when the colder weather suddenly appeared the plants were frozen in place, leaving a little snapshot of warmer weather for us to enjoy.

The gardens capture medieval Europe’s horticultural, medical and ethnobotanical footprint displaying various herbs, vegetables, ornamental and economic plants. Despite it being a brutally cold day, the scenic views of the Palisades and the Hudson River from the garden overlook were impressive.

As we recapped our visit over coffee and cake, New York City was unexpectedly hit with its first ever snow squall which covered Fort Tryon Park in the most delicate layer of snow. Watching from the cafe windows was surreal but the perfect way to end our inspiring winter outing.