Posted in Inside our Collections on January 29, 2021, by Stephen Sinon

Stephen Sinon is the William B. O’Connor Curator of Special Collections, Research & Archives, in the LuEsther T. Mertz Library of The New York Botanical Garden. 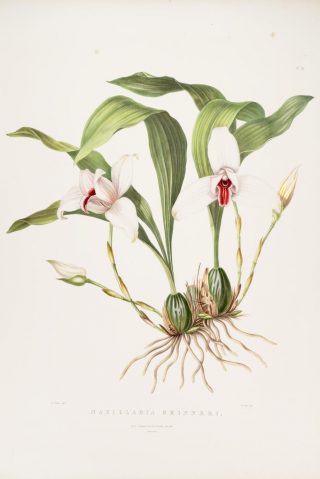 In the early 19th century, orchid growing became a fashionable pastime among the English aristocracy. Many admired the strange beauty of these flowers at flower shows and auctions. While orchid species can be found the world over, the most admired are those from tropical regions, which frequently display the most colorful blooms. It became customary for botanists and horticultural nurseries to send out orchid hunters to Asia, Africa, and Central and South America in search of unusual orchid colors and forms.

James Bateman (1811–1897), an amateur botanist and horticulturalist, was one of the most famous orchidologists of the time. Anxious to establish acquaintances with collectors living in the tropics, Bateman struck up a friendship with George Ure Skinner, a merchant residing in Guatemala. Skinner collected and sent many new orchid species, which Bateman tended to in his greenhouse and had identified by botanists such as John Lindley, who was the greatest English orchid expert of his day. Lindley encouraged Bateman in his studies, assisted him in his writings, and was himself the author of many important works on the orchid. Bateman was among the first to advocate for cool orchid cultivation temperatures.

Bateman published three works on the family Orchidaceae. The first and most important is the Orchidaceae of Mexico and Guatemala. This elephant sized folio was issued in parts between 1837 and 1843 in a run limited to 125 copies, and had 100 subscribers. Consisting of 40 huge plates (27″ x 15″), Orchidaceae included descriptions as well as valuable cultural advice for the horticulturalist. Originally intended to include an analysis of the family Orchidaceae and a conspectus of all known species, the work was issued without any such text. Indeed, this publication created quite a stir due in part to its enormous size. It weighs in at 38 pounds, and remains today the largest botanical work ever printed—often referred to as “the librarian’s nightmare.” 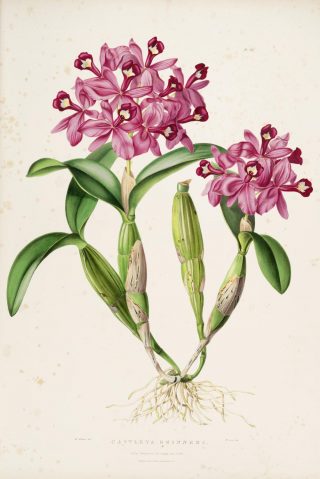 In addition to its vast size, the fame of Orchidaceae rests on its extraordinary hand-colored lithographic plates which depict each orchid at life-size and in full bloom. Almost all of the plates depict a newly discovered species named after various English noble families. Twenty-one of the plates were illustrated by Mrs. Augusta Innes Withers (1793–1864), flower painter to both Queen Adelaide and Queen Victoria, and 16 are by Miss Sarah Anne Drake (1803–1857). Little is known of the life of Miss Drake, but it is suspected that she may have been related to John Lindley’s wife and a member of his household; she was the chief illustrator for Lindley’s publications from 1832 to 1847. Mrs. Withers taught flower painting and produced drawings for various books and magazines during the 1830s and ’40s among them the Pomological Magazine and Curtis’s Botanical Magazine. An exhibition of her work at the Horticultural Society in 1834 was highly complimented.

These plates are not the only illustrations to be found in the work. A series of 38 vignettes illustrating daily life in Mexico, natural history specimens, and humorous caricatures are scattered throughout the text and coupled with lines of verse. One of these vignettes depicts a lilliputian crowd attempting to lift a copy of Orchidaceae with poles and pulleys. It is signed by the celebrated caricaturist George Cruikshank (1792–1878).

Bateman served as a fellow of the Linnean Society as well as the Royal Society, and was awarded the Veitch Memorial Medal by the Royal Horticultural Society in 1885. He died at the age of 86 in 1897.