Unwind during special extended summer hours and make the most of the late sunsets while taking in the Brazilian Modern exhibition. Burle Marx’s home, the Sitio, was famously known as a place where friends, colleagues, botanists, artists, poets, and other cultural figures from around the world gathered and socialized, and the spirit of that space comes to life during these evenings at NYBG. Sip a caipirinha, the national drink of Brazil; enjoy the rhythms of Rio de Janeiro during acoustic guitar performances; and explore the lush tropical plantlife of Brazil as the day transitions to early summer evenings.

The Sounds of Rio de Janeiro

The sounds of Brazilian guitar fill the air of the Conservatory plaza.

Cesar Garabini is an Italian-Brazilian 7-string guitarist who specializes in Choro, the predecessor to the well-known Brazilian music styles Samba and Bossa Nova. In the past 7 years he has performed at Jazz at Lincoln Center, Jazz Standard, Birdland, Columbia University, the Museum of Modern Art, with a monthly residence at Barbes. He has worked with Anat Cohen, Olli Soikkeli and Tim Connell. He has been featured on NPR, NBC and Global. 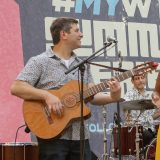 Enjoy Caipirinhas and Other Refreshments

Wind down and enjoy drink specials featuring Brazil’s national drink, the caipirinha, along with beer, wine, and more for sale. Plus, grab a bite to eat from Merenda, our Brazilian-inspired food truck.

Caipirinha
Enjoy our take on Brazil’s national cocktail, made with cachaça, sugar, lime, and pineapple—or request a classic caipirinha made to order.

Guava Caipiroska
A refreshing take on the caipirinha made with vodka, sugar, lime, guava and pineapple.