In the 19th century, explorers, scientists, and citizens, curious about the world west of the Mississippi River, undertook ambitious expeditions into western North America. The Corps of Discovery Expedition of 1804-06—most commonly known as the expedition undertaken by Captain Meriwether Lewis (1774-1809) and Second Lieutenant William Clark (1770-1838)—is among the most famous exploratory missions. This expedition, and the many others that followed, involved collection of hundreds of plant specimens. By the 1840s the concept of Manifest Destiny—the idea that the nation should extend from the East coast to the West coast—led to the establishment of the Corps of Topographical Engineers, a new branch of the army. Members of this group surveyed and mapped their way across the continent, the first step to the establishment of transportation routes.

Civilian scientists were regularly employed on these missions, describing and documenting the plants and minerals they encountered. John Torrey, often in collaboration with Asa Gray, studied the plant specimens collected by many of these intrepid travelers. Specimens from nearly every federally-sponsored expedition to the west and south during the 1800s were referred to Torrey for classification. As these new discoveries came to light, American botanical knowledge grew.

While Torrey himself declined to serve in the unpaid role of botanist on this expedition to explore the upper Missouri River, he recommended Amos Eaton’s former student Dr. Edwin James (1787-1861) for the position. Torrey classified the specimens collected on this expedition, and described them in the Annals of the Lyceum of Natural History of New York.

Image: S. Seymour, View of Ruins at the Base of the Rocky Mountains. In Account of an Expedition from Pittsburgh to the Rocky Mountains by Stephen Harriman Long (1784-1864). Philadelphia: H.C. Carey and I. Lea, 1822-1823. LuEsther T. Mertz Library, The New York Botanical Garden. 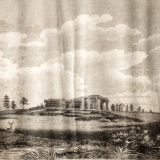 In 1842, Commander Charles Wilkes (1789-1877) returned from four years circumnavigating the globe with 50,000 herbarium specimens, the seeds of 684 species, and 254 species of living plants. This led to the creation of the National Herbarium, (which Torrey organized and later maintained in New York during the Civil War) and the United States Botanic Garden.

Torrey confined his work on Wilkes’ specimens to cataloguing the collections made in California and Oregon. This research comprised Torrey’s last major research project, the results of which were published in the Phanerogamia of the Pacific Coast of North America (1862). 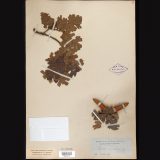 Georgia-born John Charles Frémont (1813-1890) was a lieutenant with the United States Corp of Topographical Engineers who led five expeditions to the west on his own beginning in 1842. Frémont’s explorations—his stories of vast natural beauty and hardship—would become legends that excited a generation of Americans to follow the routes he mapped. His work established knowledge in the geography—and the botany—of the entire western half of the United States, opening a new frontier to thousands of migrants who journeyed on the Oregon and California trails in search of new homes.

Frémont had learned to collect plants on his first expedition in the service of Joseph Nicolas Nicollet (1783-1843). Nicolett, a geographer was charged with mapping the upper Mississippi basin in the 1830s. When Fremont began to make plans for the first expedition he would lead in 1842, he wrote to John Torrey to enlist him in the review and classification of the plant specimens he would discover. This first letter began a long and fruitful friendship—the two men corresponded for more than a decade, and over the series of expeditions Frémont would lead, he collected more than 1,000 specimens, which resulted in the naming of 137 new species and 19 new genera—including one he named after Torrey (Torreya).

Learn more about the 1842 Expedition 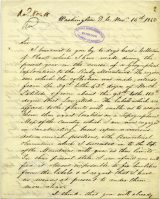 Major William H. Emory (1811-87) explored mostly in Texas and along the U.S.-Mexico border. He collected and sketched plants, giving the drawings to Torrey. The resulting Report of the United States and Mexican Border Survey (1859) included plant identifications by Torrey and Gray as well as George Engelmann (1809-84), an expert in cacti who was instrumental in describing the flora of the American west. 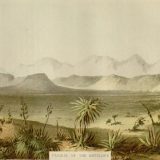 Image: Pikes Peak. In Report of the Exploring Expedition to the Rocky Mountains in the year 1842, and to Oregon and North California in the years 1843-44. Washington: Gales and Seaton, printers, 1845. LuEsther T. Mertz Library, The New York Botanical Garden.