Many of the earliest studies of North American botany were carried out by European scientists and explorers, beginning with the earliest colonial settlers in the 17th century. Even after American independence, the scientific infrastructure of the young nation—libraries, herbaria, and widespread support for these activities—was not yet in place. Many early figures in American botanical study, such as Philadelphia-based William Bartram (1739-1823) and Henry Muhlenberg (1753-1815) documented local flora near their homes, making periodic botanical collection trips and creating active networks of botanists through correspondence. By the 19th century, these networks extended throughout the United States.

Torrey was a prolific writer from the beginning of his career. A Flora of the Northern and Middle Sections of the United States (1824) classified plants according to the Linnaean system, while his Compendium of the Flora of the Northern and Middle States (1826) used a natural system. Torrey published the first American edition of John Lindley’s An Introduction to the Natural System of Botany in 1831.

In 1826, Torrey wrote to friend and fellow botanist William Darlington (1782-1863) about his preferred collection methods:

“How do you collect your specimens of plants? Do you take a box or a large book with you into the field? I prefer a book for those specimens which I intend to dry. It is made of smooth paper about the size of a newspaper folded into a quarto and furnished with a strap and buckle at the front and at each side. There is also a strap on one of the covers by which it is suspended on the back or at the side…It is very well to take with you besides this book, a small ‘Vasculum Dillenianum’ for keeping fresh such specimens as you are desirous of examining in a natural state.” 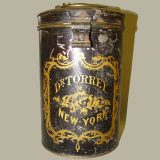 Torrey first became acquainted with medical student Asa Gray (1810-88) when the younger man sought his opinion on botanical specimens in 1830. They began a lifelong partnership and friendship. After accepting a teaching position at New York University in 1832, Torrey asked Gray to aid him in his botanical research. While Torrey traveled to Europe to secure books and equipment for his new laboratory, Gray assisted from New York.

Together Torrey and Gray undertook several ambitious projects, the first of which was A Flora of North America, an updated, comprehensive survey of the plants of the continent. This work would extend to a larger territory and much wider range of plants than Torrey’s earlier Compendium of the Flora of the Northern and Middle States (1826), and was among the most comprehensive floras of the Americas to date. Working steadily together, with Torrey making most of the taxonomic distinctions and Gray drafting most of the text, they published six of the planned seven volumes of their Flora between 1838-43. 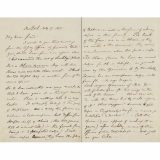 In 1842 Gray became professor of botany at Harvard University, around the same time the collaborators began to research and identify larger numbers of plant specimens being collected by North American expeditions to the South and West, many of which were government-sponsored.

Gray would enjoy a successful career at Harvard, authoring important publications including A Manual of Botany of the Northern United States, from New England to Wisconsin and South to Ohio and Pennsylvania Inclusive (1848) and creating a significant herbarium at the university, and becoming an early proponent of Darwin’s theory of evolution. 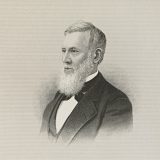 Appointed State Botanist of New York in 1836, Torrey spent the next seven years compiling a comprehensive flora of the state. Decades later, botanist Nathaniel Lord Britton, who would become the founding director of The New York Botanical Garden in 1891, described A Flora of the State of New York as “the most noteworthy, elegant, and complete local flora of any produced in the United States.”

In the 1850s Torrey was finally able to leave his teaching positions to focus entirely on his botanical studies. When his friend and colleague Joseph Henry (1797-1878) left Princeton University to become secretary of the newly-formed Smithsonian Institution, Torrey assisted in the assembly, care, and maintenance of what would become the national herbarium, even taking the specimens into his care for safekeeping for the duration of the Civil War. By 1868, this collection contained between 15,000-20,000 specimens.

From the 1840s on, Torrey lectured with increasing frequency, ultimately inspiring the creation of the Torrey Botanical Club in 1867. Still active today as the Torrey Botanical Society, this organization, the oldest of its kind in the Americas, continues to publish a scholarly journal and meets regularly. 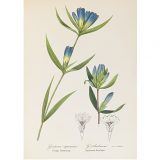