NYC EcoFlora and the NY Mycological Society are co-hosting a fungal foray in Alley Pond Park on January 29 at 10 am.

Whether you are new to the world of fungi, or are an experienced mycologist, come join us to explore the park, share knowledge, and discover some amazing organisms! Led by Misha Zitser, an active iNaturalist contributor and fungi enthusiast, the walk will last 3+ hours. Make sure to dress warmly, and bring water and a snack, as well as a hand lens if you have one (we will have extras to borrow).

For more information on what to expect, check out the NY Mycological Society’s FAQ page.

Misha Zitser has spent the last two years observing the flora, fauna and funga of New York City. He joined the iNaturalist community in 2020 and has been actively contributing observations to the New York City EcoFlora project.

He is also a prolific contributor to the New York Mycological Society’s “Fungi of NYC” project. While Misha enjoys traveling through the city’s boroughs, most of his observations are from the parks in his backyard – two beautiful, forested parks in Queens, Alley Pond Park and Cunningham Park. As Misha puts it, “Here, less than an hour away from the skyscrapers of Manhattan, I can observe White-tailed deer, Red foxes, flying squirrels, Great Horned Owls and even Coyotes.Every day that I venture into the woods, I am surprised by something new. I may find a species of plant or fungi that I haven’t seen before, or perhaps a new bird or insect. One time, I witnessed a dramatic tussle between a Silver-haired bat and a Red-bellied woodpecker. Mother Earth takes her time to reveal her secrets. Discovering these secrets is what drives me to go to the woods every day.” 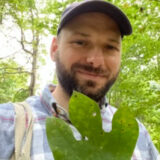 The park is most easily accessible by car, but there are several public transportation options as well.

We will meet at 10 a.m. in the southeastern portion of the park, near the tennis courts on Winchester Road.