I am interested in the evolution, systematics, and biogeography of the genus Schefflera (Araliaceae), which is a diverse and complicated group of tropical shrubs and trees. I am focusing on the smaller Sciadaphyllum group within the genus, which is a neotropical group centered in the northern Andes. Like Schefflera as a whole, the Sciodaphyllum group is problematic in that relationships among its species are poorly understood. My research project consists of a phylogenetic analysis of the group to understand relationships of the species, in addition to a detailed study of the distributions, ecology, and distinctions of the species. I am combining specimen-based research with field work and molecular systematics. In addition, I am exploring the ways in which Niche Modeling can be used to predict species distributions using environmental and ecological variables. 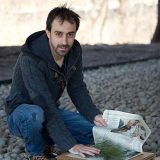