Liverworts, hornworts and mosses are critical components of many terrestrial ecosystems yet they often are understudied, especially in southern Chile. The floristic series Flora Criptogámica de Tierra del Fuego nominally covers the geographic area proposed here for a flora of mosses, liverworts and hornworts, but the vast majority of specimens cited in that work from the Cape Horn region were gathered in the 19th century, with most being type specimens collected on the Erebus and Terror Expedition. Furthermore, this series, including revisions of only a few families, remains, following the death of its lead author, Dr. Celina Matteri from Argentina, largely unfinished.
This project seeks to complete a comprehensive treatment of the liverworts, hornworts and mosses of the Cape Horn Archipelago, a physically and biogeographically distinct region of Chile known as a center of biological richness and south temperate endemism for non-vascular plants and diverse animal groups. Because of its biological diversity, the region is the subject of increasing conservation interest and activity. Fundación Omora, in conjunction with UNESCO, is working to design and implement strategies aimed at sustainable biodiversity conservation. In order to efficiently and effectively accomplish this goal, accurate and detailed information for all groups of organisms is needed. Liverworts, hornworts and mosses were initially investigated because the local indigenous people of the region identified them as more diverse than vascular plants, observations that have been verified by our fieldwork. We have found numerous records new to the region, including Northern Hemisphere disjuncts and species previously thought to be Antarctic/ subantarctic endemics. New species have already been identified from our collections, as well as many tentative ones requiring additional study. 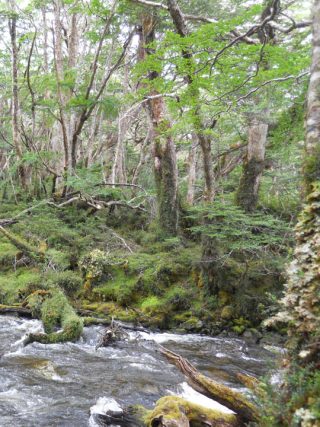