My research incorporates a diverse set of tools to address pressing concerns in lichen conservation. Specifically, I use ecological niche modeling, molecular phylogenetics, and population genetics to investigate how rare lichens will be impacted by climate change in the coming century. Currently, my research is focused on two regions in eastern North America: the southern Appalachians and Mid-Atlantic Coastal Plain. The results of my research thus far show that high-elevation endemics in the southern Appalachians will lose most, if not all, of their currently suitable habitat within the century, and that areas of the coastal plain with the highest lichen diversity will be disproportionately impacted by sea-level rise. I was awarded the National Science Foundation Graduate Research Fellowship and have taught courses on lichen identification and the fundamentals of science. 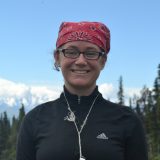