The Flora of Central Park is a collaboration between The New York Botanical Garden, the Central Park Conservancy and the New York City Department of Parks and Recreation. The up-to-date botanical inventory will aid on-going restoration, conservation, education and recreation programs and document the flora for scientific, ecological and conservation studies.

Activities include the collection of herbarium specimens, data analysis and public outreach.

Outcomes include the following:

The Central Park Conservancy is gratefully acknowledged for their generous financial and technical support.

The flora of Central Park was documented through extensive collection of herbarium specimens from 2013 to 2017. The flora consists of 438 species representing 262 genera and 89 families. Native species represent 45% of the flora (198 species), and 54% of the species (240) are nonnative. 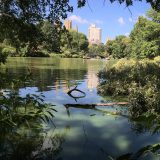