Explore everything the Garden has to offer this season, from pumpkin carving tips to fall recipes to decoration ideas. Keep checking back for more on everything cucurbit — the pumpkin family name.

Working with the Great Pumpkin Commonwealth (GPC), NYBG has displayed some of the world’s largest pumpkins each fall since 2011. GPC is a global network of pumpkin-growing hobbyists who share information with one another and organize weigh-off competitions that adhere to strict standards.

To grow a giant pumpkin, you need seeds with the right genes. In 1981 Howard Dill of Nova Scotia, Canada, broke the world record with a 493.5-pound pumpkin. You can still spot pumpkins descended from Dill’s record setter by their bright-orange coloring. After nearly 40 years of selective breeding, today’s giants can exceed 2,000 pounds. 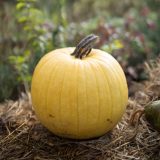 The bright-yellow color of this cultivar is a result of years of breeding by Brent Loy of New Hampshire. 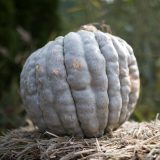 This blue-gray pumpkin gets its name from Jarrahdale, New Zealand, where it originated. 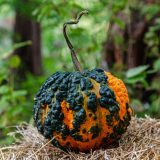 Small pumpkins with big personality can sometimes make the biggest impact in your fall decorations. 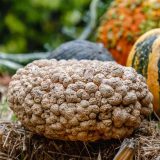 The peanut-shaped warts on this cultivar are caused by an excess of sugar that bubbles to the surface and hardens. 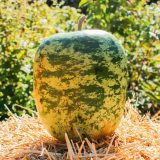 Gourds like this one make for great bird-houses when they are dried. 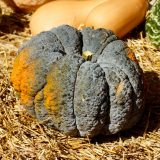 Initially a dark green, this cultivar becomes a tan color as it ripens on the vine. 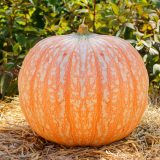 This cultivar is actually white with veins that vary in color from green to orange to red. 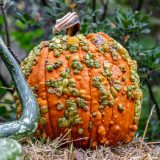 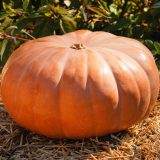 This cultivar first came to market on Long Island in 1807, making it one of the oldest domesticated squashes. 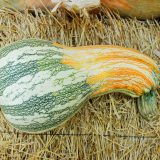 Cushaws are also known as crookneck squash, and are great for making pies and roasting. 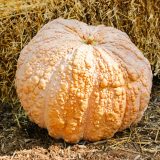 The longer this pumpkin stays on the wine the more warty it gets. 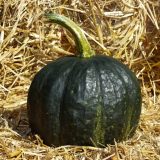 Native to South America, this squash has been grown in New England since the 1830s. 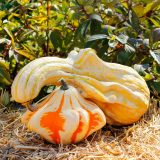 These gourds come in a wide variety of colors ranging from white to dark green to yellow to black. 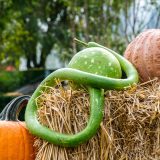 When cut and dried these gourds can be used as ladles, or dippers. 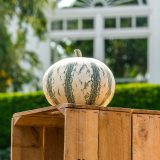 This pumpkin is named for its delicious seeds, which are white with silver edges. 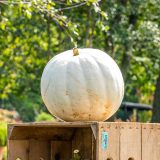 Unlike other white pumpkins, ‘Crystal Star’ stays white throughout the season instead of yellowing or turning gray. 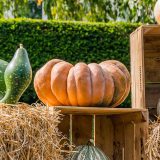 This cultivar was created in France, and is also known as Musquee de Provence. 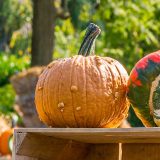 The muted caramel color of this pumpkin will stand out in your display. 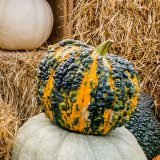 Originally grown for its oil rich seeds, the seeds can be pressed to produce a dark oil perfect for soup or salad dressing. 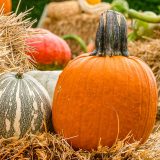 The thick, dark green stem of ‘Wolf’ creates a beautiful contrast with the burnt orange skin. 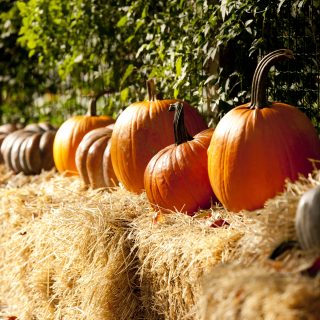 Try choosing a pumpkin with a healthy, dark-green stem.

Check for mold growth on the stem and on the base of the pumpkin.

Select a pumpkin with smooth skin for an easier carving process. 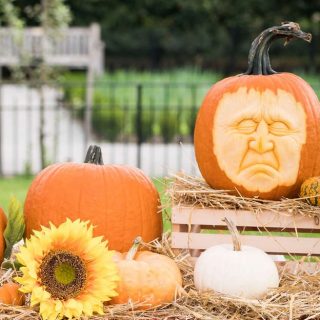 There are three main styles of pumpkin carving:

Jack-o’-lanterns are the most popular, and made by cutting holes into the pumpkin.

Etching is when the skin is removed, but the rest of the flesh remains. Sculpting takes etching a bit further by carving into the flesh.

Tip: If you are stumped, let the shape of the pumpkin guide your design–a silly face might suit a lop-sided pumpkin, and a flat-sided pumpkin might be a great canvas for a Halloween greeting. 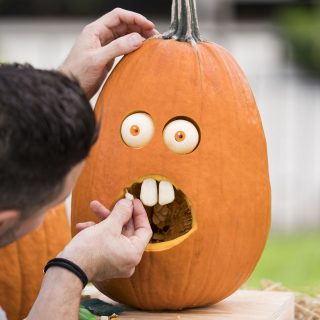 Make sure to have an adult present while carving your pumpkin.

Get creative with the tools you use–an ice cream scoop could be the perfect size for eyes.

To get clean lines, keep your carving tool level while cutting through the pumpkin. 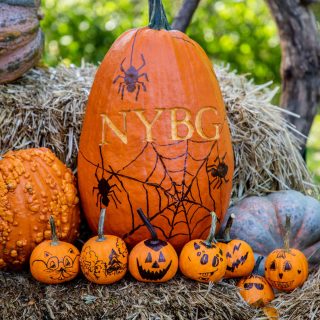 Time it right–carve your jack-o’-lantern just before you plan to display it, and at most a few days in advance.

Clean your tools–be sure to use clean and sanitary tools to prevent bacteria and mold contamination.

Clean your pumpkin–create a mixture of lemon juice and water to spray on the cut areas of your pumpkin during and after carving to prevent mold and bacteria from growing.

Brush up on your pumpkin carving skills.

Add stripes and polka-dots to your display with some of our favorite varieties of cucurbits.

Try a monochromatic display--play with hues of orange and textures.

Sometimes more is best--highlight the variety of the Cucurbitaceae family in your display.

Take advantage of the colorful Cucurbitaceae family and create a rainbow display. 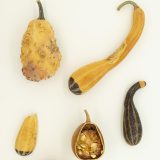 Oh My Gourd: The Hand Lens

Explore our virtual herbarium – a repository of dried examples of plant species from around the world – and read about autumnal favorites in the collection.

Witches – Explore our round up of witch-y herbarium specimens and the source of their peculiar names.

Mulled Cider – Making cider this fall? Learn about the spices that go into your favorite drink. 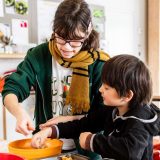 Explore the fall-inspired flavors created with the best produce the season has to offer.