Posted in Plant Science and originally posted on January 31st, 2013, by Scott Mori

Scott A. Mori has been studying New World rain forests for The New York Botanical Garden for over 35 years. He has witnessed an unrelenting reduction in the extent of the tropical forests he studies and as a result is dedicated to teaching others about this species rich ecosystem. 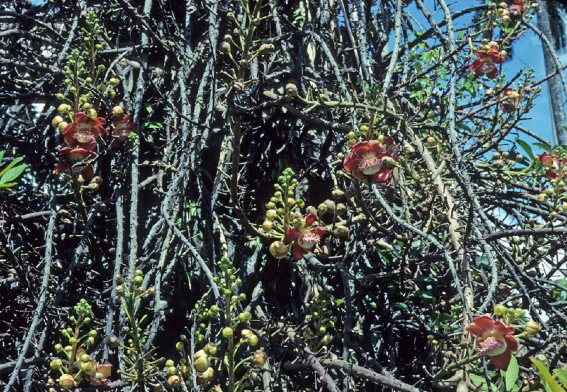 A tangle of flowers arising from the trunk of a cannon ball tree in Grenada. (Photo by Scott A. Mori) 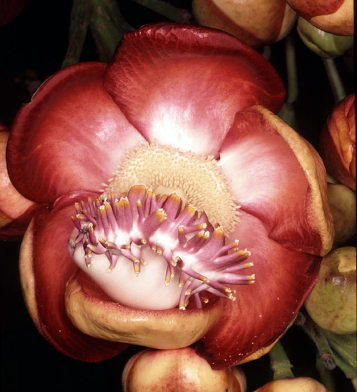 Flower of a cannon ball from a tree growing as an ornamental in Costa Rica. (Photo by Scott A. Mori)

I still stand in awe each time I see the cannon ball tree (Couroupita guianensis), a member of the Brazil nut family. In fact, it is such an astonishing plant that I am nominating it as the most interesting tree on Earth (disclaimer: I am a specialist in the Brazil nut family and my nomination may be biased). After you read this essay, I would like to know if you agree with me—if not, I challenge you to nominate a tree, tropical or temperate and from any part of the world, that you feel is more interesting than this marvel of nature.

In nominating your tree, consider the aroma of the flowers or fruits, interesting plant or animal interactions, economic use, ecological dominance, or any other criteria that you think merits recognition. Until the end of the Tropical Paradise show, I will continue to introduce you to tropical plants that have impressed me over the course of my career. 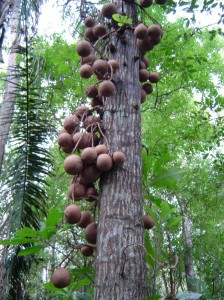 Unfortunately, because the cannon ball tree can only grow outside of its natural habitat when cultivated in subtropical and tropical botanical gardens, it can not

be found at the NYBG. However, if you have a chance to visit the Miami area, you can appreciate it in cultivation at the Fairchild Tropical Botanical Garden in Coral Gables. In the meantime, you can enjoy tropical plants throughout all seasons in the Enid A. Haupt Conservatory, including Gustavia augusta, another member of the Brazil nut family.

The cannon ball tree is planted in gardens because the flowers, arranged on long stalks projecting from the trunk, are large, beautiful, pleasantly aromatic, and unlike any other flower a newcomer to the tropics has ever seen. Even the fruits are a botanical curiosity because they mimic the shape and size of cannon balls, but, in contrast to the flowers, they release a fetid aroma at maturity when they hit the ground and break open.

Flowers of the cannon ball tree are without nectar, but bees are rewarded for visiting them with a special kind of pollen. The structure of the male part of the flower (the androecium) is found only in the Brazil nut family. Fertile stamens occur in a ring surrounding the style, but what makes the flower different is the unilateral prolongation from one side of the ring, bearing the staminodes with antherodes that contain pollen that never germinates (in contrast, the pollen of the ring is fertile and does germinate). The pleasant aroma attracts the pollinators to the flowers and the yellow color at the apex of the staminodes directs bees to the sterile pollen, especially female carpenter bees (Xylocopa brasilianorum), that gather the sterile pollen to feed their larvae. While they are collecting sterile pollen, fertile pollen is deposited on their heads and backs, where it is subsequently rubbed onto the stigmas of the next flowers visited, thereby effecting cross-pollination–the first step in the production of seeds.

Lateral view of a cannon ball tree flower showing the location of the fertile stamens and the staminodes. (Photo by Scott A. Mori)

At maturity, the cannon ball-like fruits fall to the ground where they often crack open, revealing a mass of bluish-green pulp that exudes a fetid aroma and surrounds hundreds of seeds. Mammals (such as peccaries and pacas) further break open the fruits and swallow the pulp along with the seeds. Protected by specialized, intertwining hairs, the seeds pass through the mammal’s digestive track and germinate away from the mother tree, where they have a better chance of growing into the next generation of cannon ball trees.

For those interested, more details and images of this fascinating tree can be found on our scientific website dedicated to the Brazil nut family as it occurs in the Neotropics.